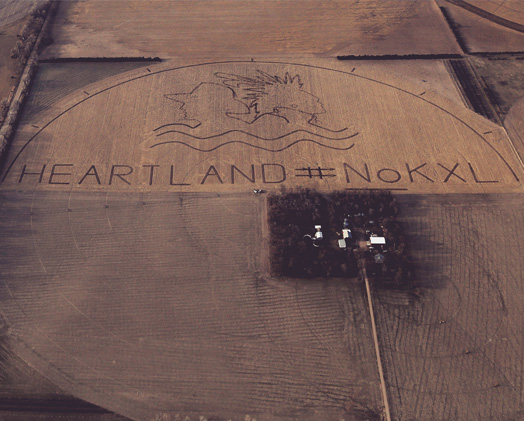 As the U.S. Senate prepares for a day of floor speeches on Keystone XL and a vote this evening on a bill that would force approval of the controversial tar sands pipeline, environmental, landowner, and labor groups that oppose the pipeline are making their voices heard in opposition to the project.

“We are really sick and tired of being told how safe this project will be by people who live fifteen hundred miles away and are fully insulated from the inherent risks associated with it. Would you be so anxious to vote “yes” if this pipeline were going to run through your property where your family lives, works and plays?

Our families will not watch our land and water get polluted so Canada can get their risky tar sands to the export market.

You oil-soaked Senators should be ashamed of yourselves and if you have the nerve to talk about the constitution or property rights again, we will be there to set the record straight. A vote for Keystone XL is a vote for eminent domain for private gain and a vote to pollute our water.”

Full text of the letter is available here.

“The Keystone XL jobs numbers claimed by the oil industry and its backers in Congress are not based on sound research. The southern leg of the pipeline has already been built, and yet the job numbers the oil industry and their political allies claim will be created by the project seem to keep on rising.

We are for jobs. There is no shortage of water and sewage pipelines that need to be fixed or replaced, bridges and tunnels that are in need of emergency repair, transportation infrastructure that needs to be renewed and developed. Many thousands of jobs could also be created in energy conservation, upgrading the grid, maintaining and expanding public transportation–jobs that can help us reduce air pollution, greenhouse gas emissions, and improve energy efficiency.

Congress is not set up to be a permitting authority, and this pipeline doesn’t even have an approved route. The ongoing review process should continue, and the decades-long precedent of having the Executive Branch make decisions on cross-border projects should not be overturned.”