While a brave collective of Nebraska farmers and ranchers who have put their lives on hold to fight for their livelihoods and protect our land and water stood up against TransCanada in court in Holt County today, Gov. Pete Ricketts — who has never met with any of these families who stand opposed to a tarsands pipeline in their backyards — sent a letter to President Obama urging him to approve the Keystone XL pipeline.

Gov. Ricketts lies in the first sentence of the letter. The pipeline route still crosses the Ogallala Aquifer. Not even the Nebraska Dept. of Environmental Quality or U.S. State Department say the route avoids this lifeblood body of water. The route also still crosses the Sandhills, if you use an actual soil map, or just walk the proposed route. Gov. Ricketts should at least tell the truth when writing to the President and speaking to Nebraskans.

“Before Gov. Ricketts sends letters to the President, he might want to sit down and visit with landowners and environmental groups who have valid concerns. He has not once sat with farmers and ranchers who were in court today protecting their property rights from eminent domain for private foreign gain. However, since Ricketts is paying for a former (or current?) TransCanada consultant as his private contractor and his Public Relations Director also worked on behalf of TransCanada, I see where he is getting his bad advice and incorrect information on the so-called jobs and economic activity. At the very least, we advise the Governor to not lie to the President. The route crossing the Aquifer was one of the main reasons people objected to the pipeline and even the Governor’s DEQ acknowledges the pipeline route still crosses this critical body of water.”

In the letter (pasted below), Gov. Ricketts says we need the pipeline “for the jobs.” After TransCanada backed away from their initial PR-spun lies of “hundreds of thousands” jobs KXL would bring, or “20,000,” a more sober analysis found the pipeline would create roughly 2,000 jobs over 2 years of construction, and… 35 total permanent jobs once completed.

How many of these exclusive positions will go to Nebraskans? Maybe 10-15% of the 2,000 figure. For comparison, during construction of Keystone’s Phase 1, TransCanada employed a total of 2,580 workers in South Dakota, but only 282 workers were residents of the state.

The map below, taken directly from the State Dept.’s environmental report on the Keystone XL, (page 3.3-23,) shows the pipeline route still crosses the Sandhills and aquifer. Dozens of farmers and ranchers who have stewarded this land for generations and know it better than anyone will tell you as much themselves.

If Gov. Ricketts is suddenly so gung-ho on Keystone XL, we also question why he nor any representative of the State was present during today’s hearing in Holt County — in a case that directly concerns the Governor’s office and has the potential to revoke TransCanada’s eminent domain authority for the pipeline.

We invite Gov. Rickets to a town hall with landowners who have concerns about this pipeline, to hear from folks who are directly at risk from a foreign pipeline that would pump almost 1 million barrels of tarsands and benzene everyday near their homes, and across their land and water sources. 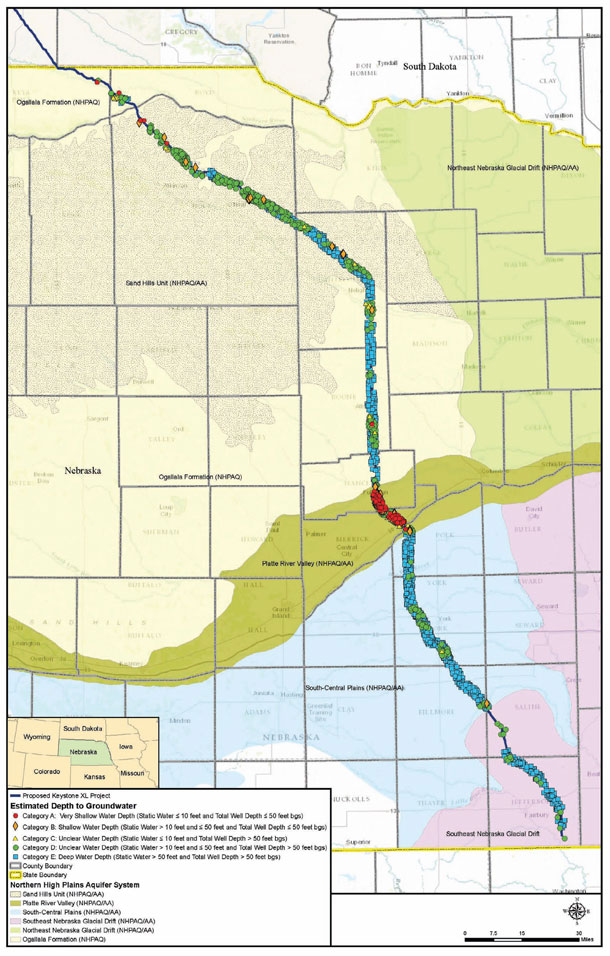