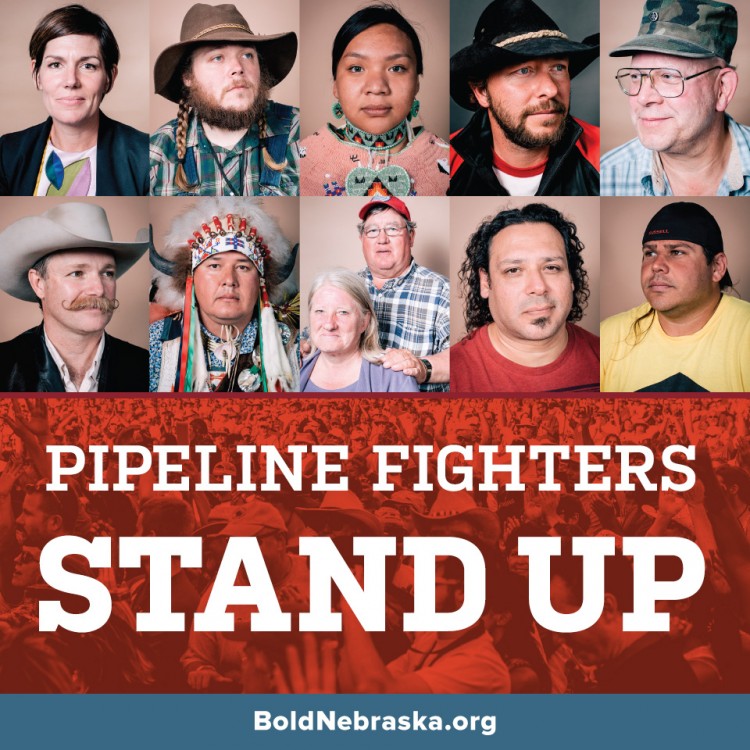 Years of actions, shoulder to shoulder, taught us one simple lesson: we never give up, we never back down, we keep moving forward together.

Millions of Americans who stand up every day to protect our land and water from risky tarsands will not cower in the corner because Republicans, backed by polluters, won some seats.

President Obama has all the information he needs to reject Keystone XL right now, and to start putting property rights, climate change and the clean energy that moves our country forward on the table as key election issues.

Nebraskans are about to send Keystone XL’s biggest cheerleader, Rep. Lee Terry, into retirement. We formally call on Lee Terry to concede the race.

Terry must face the reality that his status quo politics have been rejected by Nebraskans. Polluters and foreign oil companies that threaten eminent domain against farmers and ranchers is the company Terry keeps, and the the type of people Nebraskans reject.

Local grassroots citizens and unlikely alliances are changing politics. We are small but mighty. And, we are just getting started.

Fellow grassroots citizens in Maine re-elected Commissioners who supported a town’s tarsands ban and rejected politicians who support the risk to their water and livelihoods. In Michigan, Rep. Gary Peters stood up to the Koch brothers’ tarsands refinery and their petcoke pollution, and he won a U.S. Senate seat last night.

In the days coming, you will hear pundits and politicians say Keystone XL will be used as a bargaining chip. They will say the President is weak; they will say the Senate will now approve the pipeline.

DC is a town full of hot air, of people who spin and mislead. Republicans have also threatened to sue and impeach the President, but they do not have the courage or political will to act on their empty threats.

Those of us on the front lines who would have to live with Keystone XL’s toxic tarsands spills know President Obama will stand with our families over polluters and veto the pipeline.

We have some updates on Election Day races from the New Energy Voter Guide in a blog post.

Pipeline fighter candidate Adam Morfeld won his seat for State Senator; he will be a champion for our families and clean energy. Nebraskans by a wide margin approved the minimum wage increase, a campaign led by fellow pipeline fighter Sen. Conrad. Clean energy champions Mary Harding for NPPD, Jeff Lux for OPPD and Crystal Rhoades for the PSC won their races. Judge Stacy kept her judgeship.

We’ll celebrate our wins, and reflect on some tough losses. But we move forward knowing our pipeline fighting spirit is now stronger than ever to push for rejection of Keystone XL.

I am headed to Disney World with my munchkins tomorrow. I know many others who worked hard over the last year knocking doors will take a break, too.

In the coming weeks, we will release our plans for the South Dakota permit process, and an idea we have to make a big push directly to the President.

We are also awaiting the Nebraska Supreme Court’s ruling on the illegal Nebraska routing and eminent domain process. Whenever that decision comes and whatever it is, we will gather at the State Capitol.

Until then, keep sending the President hand-written letters and postcards. Remind him we are standing with him, and that we are counting on him to stand with us, the pipeline fighters.

P.S. If you start to get discouraged, just watch all of us answering the call to “Who’s Gonna Stand Up.” We are pipeline fighters and we never give up, we never back down and we keep moving forward together. Chip in $10 here to support Bold Nebraska’s work.