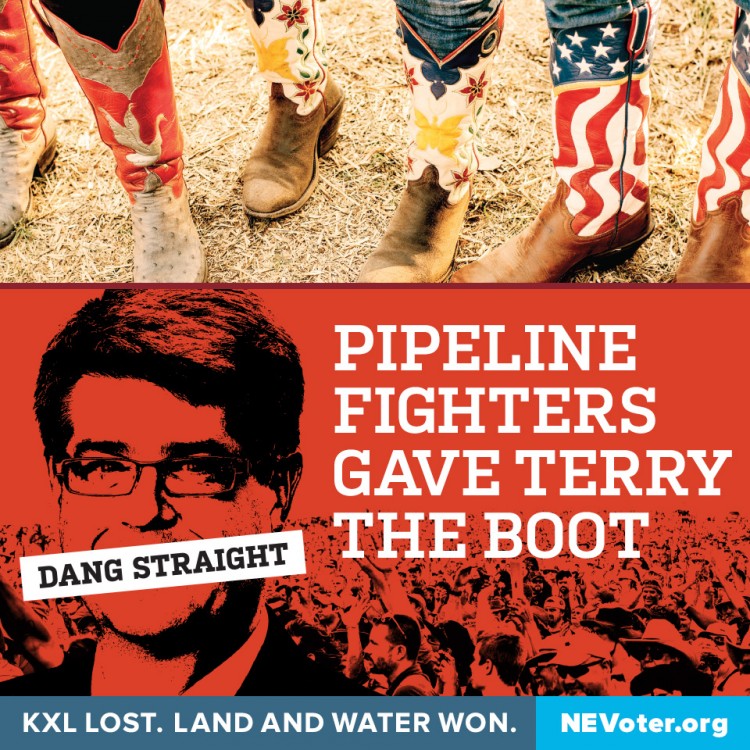 Omaha, NE — Nebraskans stood up to TransCanada by voting out Rep. Lee Terry, the top cheerleader in Congress for the foreign company’s proposed Keystone XL pipeline. While a national wave gave wins to the GOP across the country, Nebraskans who have fought the Keystone XL pipeline from day one marched in a different direction, sending Lee Terry back home to his “nice house” (“Dang straight!”).

“Pipeline fighters just gave Lee Terry the boot. Terry stood as the top cheerleader in Congress for TransCanada’s Keystone XL pipeline instead of standing with Nebraskans who care about their land and water, and citizens stood up and voted him out of office,” said Jane Kleeb, Bold Nebraska’s Director. “Big Oil should finally get the message not to mess with Nebraska’s land and water.”

“For all of the money spent by Big Oil to keep politicians in DC doing their bidding, Nebraskans pushed back and made a powerful statement by voting out seven-term Congressman Lee Terry. All politics are local, and the pipeline fighters here in Nebraska showed how much we want Keystone XL,” added Randy Thompson, New Energy Voter PAC Treasurer.

For the past four years, Nebraskans have showed up to Lee Terry’s town halls and offices to express their disappointment in his fighting for the Keystone XL pipeline over our land and water. The constant actions and unlikely alliance of Nebraskans is what finally got Lee Terry voted out of office.

A few examples of actions over the years that pushed Lee Terry out of office:

Keystone’s biggest cheerleader in Congress, Lee Terry of Nebraska, lost his seat this year because of growing opposition among Nebraskan ranchers, farmers, and landowners to his support for this risky pipeline that would threaten their livelihoods.

“The national GOP will threaten passage of Keystone XL in the coming weeks like they have for the past four years,” added Jane Kleeb. “The bottom line is this is President Obama’s decision and we are confident he will stand with farmers and ranchers over Big Oil interests.”