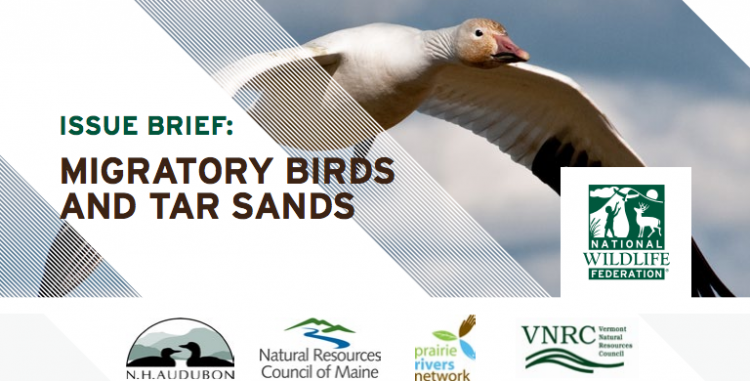 The Department of Interior is under a legal obligation – known as the Pelly Amendment – to determine whether tar sands mining and drilling in Canada is undermining a century-old international treaty to protect North America’s shared songbirds and waterfowl. Tar sands are one of the world’s dirtiest energy sources. Not only do they have significantly higher life-cycle emissions of climate-disrupting carbon pollution than conventional oil, but tar sands mining is destroying bird habitat and leaving behind massive tailings ponds.

“Many of the birds Americans watch, enjoy and hunt fly to and rely on this area, but unchecked tar sands development is turning a thriving bird breeding ground into a toxic wasteland,” said Jim Murphy, senior counsel at the National Wildlife Federation. “The Canadian government, once our friendly neighbors to the north, vowed to protect these birds in the past. But today’s Canadian leaders prioritize polluting industries over conservation and are now fouling their own nest by going all-in on destructive tar sands drilling.”

As the report details, tar sands developments sits in the heart of the previously pristine boreal forest, an evergreen haven for bird production. But now an area the size of Florida is being destroyed by huge open-pit mines, toxic waste tailings ponds that can be seen from space, extraction wells, noisy compressor stations, refineries, and networks of new roads, drilling pads, seismic lines, and pipelines.

Oil-laden tailings ponds have resulted in the deaths of countless waterfowl:

“Wildlife and tar sands don’t mix,” said Murphy. “The Canadian Government is putting polluting fossil fuel interests above the interests of birds and other species. Interior Secretary Sally Jewell and President Obama can send a message to Canada that it is unacceptable to undermine our shared wildlife heritage. The President needs to act by rejecting the pipeline projects, like Keystone XL, the tar sands industry needs and demonstrating that clean wildlife-friendly energy, not tar sands, is the answer.”