THANK YOU to all the Pipeline Fighters and Water Protectors who joined the March to Give Keystone XL the Boot on Sunday, Aug. 6th in Lincoln — and everyone who made their voices heard at the four public hearings and in their written comments we delivered to the Nebraska Public Service Commission.

Together with our coalition partners, we submitted over 460,000 public comments urging the Nebraska Public Service Commission to reject the proposed Keystone XL pipeline because it’s not in the public interest. Under Nebraska’s laws, your comments will be considered as part of the official record to be considered by the PSC in making it’s decision, and Nebraskans thank you for your solidarity.

VIDEO: Jane Kleeb speaks at rally to deliver NoKXL comments to the PSC HQ in Lincoln on Thursday. 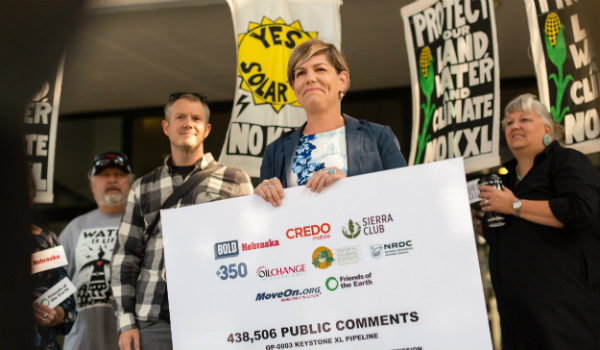 During the critical PSC intervenor hearings in Lincoln, Dave Domina and Brian Jorde — the attorneys for the Nebraska landowners who have for years been standing together to fight eminent domain and refusing to sell their land to TransCanada for KXL’s tarsands export pipeline — put TransCanada’s witnesses through the ringer with tough and thorough cross-examination. [1]

Our side’s attorneys — who also included Bold & Sierra Club Ken Winston, Nicole Frank and Sarah Houston, and attorneys Jennifer Baker for the Yankton Sioux Tribe, and Brad Jolly for the Ponca Tribe of Nebraska — exposed concerns with TransCanada’s application such as:

On the first day of testimony, attorney Dave Domina tried to get a TransCanada witness to explain the company’s inarguably shady, “19-level” corporate structure clouding the ownership of Keystone XL, eventually having to refer the witness to an organizational map in the exhibits to try to pin down just who is responsible to Nebraska landowners in these bullying contracts they’re being asked to sign.

At the conclusion of the hearing on Thursday, Bold Nebraska’s Jane Kleeb stood with landowners and spoke about the next steps in the Public Service Commission’s review of Keystone XL. 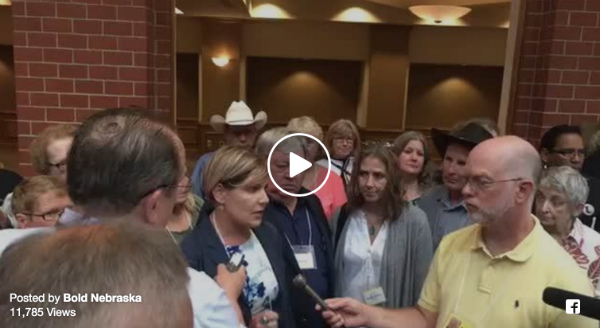 The Public Service Commission will now review TransCanada’s permit application; all of the nearly half-million NoKXL written public comments submitted and transcripts from the four public hearings; and this week’s proceedings at the intervenor hearings in Lincoln.

Attorneys will submit their closing arguments as written briefs due on Sept. 15th; all sides will then file final “reply” briefs in response to the other parties’ closing briefs, due Sept. 25th. Then, the Public Service Commission will review the entire record, and render its decision no later than Nov. 23rd. [7]

The PSC could reject or approve TransCanada’s permit application, or put stipulations on approval of the application — like mandating that TransCanada place KXL near its first “Keystone 1” pipeline route through Nebraska, which avoids large parts of the Sandhills and the shallowest section of the Ogallala aquifer.

Which ever way the PSC rules, either side is then expected to appeal the PSC’s decision to the Nebraska Court of Appeals.

We can’t do the work we do without your support. Donate $25 now to help Bold stop Keystone XL.

Thanks for continuing to stand with us.

[7] “Keystone XL hearing wraps up; opponents vow to ‘put our bodies on the line’ if pipeline approved,” Lincoln Journal Star, 8/10/17.