When I first heard that an out of state company was planning to dump fracking waste in an abandoned oil well in Western Nebraska, I knew that it was an important issue, one that needed greater public attention and awareness. When I looked at rules of the Nebraska Oil and Gas Conservation Commission (NOGCC), I knew that we needed to get both the public and the Legislature engaged in the issue, because it was clear the NOGCC would approve the application regardless of what we did. The last few months have shown that both of these assessments are correct.

There were three essential components of this effort: 1. Support and magnify the voices of the local people; 2. Increase public awareness of the issue; and 3. Increase awareness and support among members of the Legislature. All three components are interconnected and the effort is ongoing.

Getting in touch with folks in the Scottsbluff area was the first challenge. It involved lots of time on the phone and sending emails to find out who was willing to step up on the issue and get involved. Fortunately I discovered there is a strong-willed and smart group of people in the area who were willing to get involved in this issue. I made the 8 hour drive to Scottsbluff to make a presentation to a group of local folks on March 8th. They were very appreciative of my effort. My message to the people opposing the fracking waste dump was to ask the Legislature to impose a moratorium on any new fracking disposal wells until adequate rules could be put in place to protect our resources and our taxpayers.

On March 11th, the Legislature held a hearing LB 512, Senator Stinner’s bill to impose fees on fracking waste. At that time, most of the testimony from supporters focused on the need for a moratorium. Senator Stinner indicated that he was open to the idea during his testimony. The oil and gas supporters used the old technique of claiming they were the experts and dismissing the painstakingly researched testimony of citizens as emotionalism.

One of the most important aspects of our efforts to increase public awareness of the fracking waste issue was the Nebraska Sierra Club’s partnership with Bold Nebraska. We have worked closely with Bold in the effort to combat the Keystone XL pipeline and I believed it was important to join forces in this effort. Our joint efforts led to the creation of an online petition opposing fracking waste disposal that has generated thousands of signatures, as well as messages for people to attend the NOGCC hearing on March 24th and legislative alerts.

The NOGCC hearing on March 24th was one of the most unusual meetings of a public body I have ever attended, and I have more than 30 years’ experience dealing with public meetings. During the week prior to the hearing, the Commission circulated several messages indicating that only people who owned property within one-half mile of the site would be permitted to speak at the meeting. When I pointed out there was no rule that permitted them to limit testimony in that fashion, they reversed course and said that the public would be permitted to speak after all.

The NOGCC’s statements indicating they intended to limit testimony caught the attention of several other people who found it outrageous, including the Scottsbluff Star Herald, which has done both outstanding reporting and great editorials throughout this process. This issue caused both Senator Ken Haar and the Lincoln Journal Star to offer their opinions stating this as justification for a moratorium on fracking waste disposal. Senator Haar decided to travel to Sidney for the March 24th NOGCC hearing and presented testimony, both on his own behalf and on behalf of Senator Stinner asking them to delay their decision. I was among the 47 members of the public who testified in opposition to the proposed disposal well, in contrast to only 3 who supported it. That’s 94 % opposed, if you are keeping score.

Members of the public were shocked to hear that their testimony was completely disregarded by the NOGCC, although I suspected that the NOGCC would do that based on my initial examination of this issue. As noted previously, the NOGCC’s conduct of the meeting/hearing on March 24th was highly unusual. After reviewing the details of the meeting and discussing them with people with expertise in the area we decided to file an open meetings law complaint in conjunction with Bold. Although the attorney appointed to address the issue decided there was no open meetings law violation based on the idea the hearing was a quasi-judicial proceeding, my research disclosed an abundance of legal theories that would have supported a conclusion in favor of our complaint.

In the meantime, interest among members of the Legislature continued to increase. In mid-April, seven members of the Legislature, including the Speaker and the Chair of the Appropriations Committee, sent a letter to the NOGCC asking them to delay making a decision. In spite of all the opposition from the public, which included letters of opposition from 8 local political subdivisions and the messages from the public and state senators I have described, on April 22nd the NOGCC took all of six minutes to approve the out of state fracking waste permit. That decision is currently on appeal to the District Court.

In May Senator Ernie Chambers began circulating a bill that would require full disclosure of all the components of fracking waste. Since the bill would be introduced far after the time for bill introductions in the first 10 days of the session, it required 30 votes to suspend the rules. Senator Chambers got 30 co-sponsors of the bill and received 37 votes to permit its introduction, which shows how much the interest in this issue had grown since the beginning of the session. The hearing on LB 664 was held on May 27th, two days before the end of the session. Unfortunately the bill was heard at the same time as a filibuster on a corporate agriculture bill and right before the override effort on Senator Chambers’ bill to eliminate the death penalty, which reduced the amount of attention it received from senators, media and the public. On the other hand, the public testimony by all concerned, particularly the folks in Western Nebraska, was focused and well-researched, as well as showing their heartfelt concern for protecting our life-giving water and other resources.

There are two interim studies on issues related to the Nebraska Oil and Gas Commission. Senator Stinner’s LR 154 is an examination of the NOGCC and their authority related to wastewater disposal. Senator Ken Haar’s LR 247 examines whether the functions of the NOGCC should be handled by another agency or agencies. I understand the Natural Resources Committee intends to combine both studies and plans to have at least one hearing in Western Nebraska.

For our part we are continuing to support the folks in Western Nebraska, their efforts to fight this fracking waste dump and make people aware of this issue. We are researching what other states have done with idea of finding the “gold standard” to protect our water, as Senator Ken Haar put it. We are also looking for experts who can speak authoritatively in response to the arguments made by the shills for the oil and gas industry. We will keep folks posted on future developments, including awareness-raising events and any activities by the Legislature during the interim. 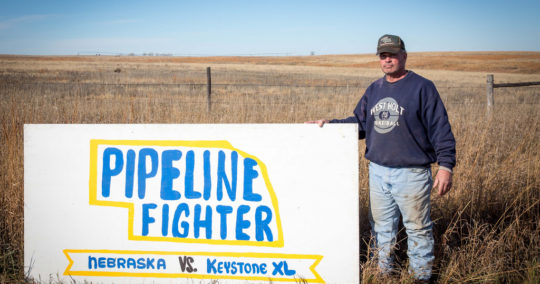