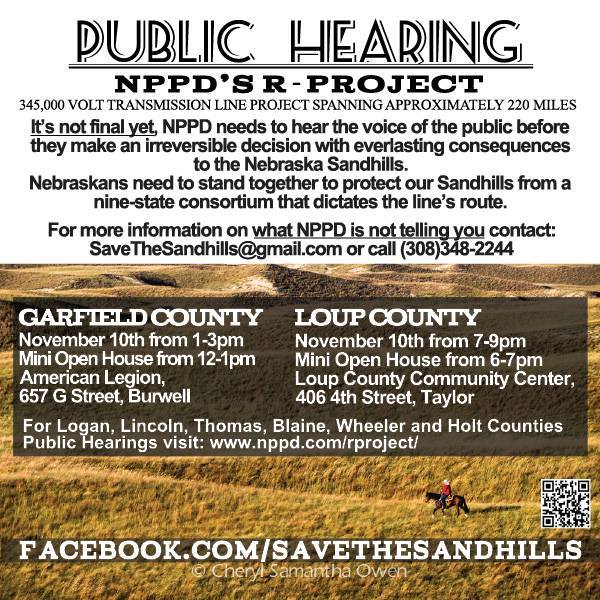 Another round of public hearings for the proposed Nebraska Public Power District R-Line transmission project will be held this week.  The project has been met with resistance from several Sandhills ranchers, who argue that the massive power lines will impact wildlife and tourism and that construction will damage the sandy soil.  Opponents of the project argue that NPPD should use existing corridors to aid in maintenance, since NPPD’s preferred route cuts through a remote part of the Sandhills that has very few access roads.  The project has been approved by the Nebraska Power Review Board, but a final route has not yet been announced.

Ranchers have organized, started a Facebook page called Save the Sandhills, have begun circulating an online petition, and have opened a YouTube channel.

Link to petition to protect the Sandhills: https://www.change.org/p/nebraska-public-power-district-protect-the-nebraska-sandhills

A sample testimony, which was read at an R-Line hearing in Stapleton last week, appears below, and demonstrates the position of the ranchers and landowners who are opposing NPPD’s current preferred route of the R-Line transmission project:

-The NPPD is required by Nebraska law to prove that the R Project is necessary, feasible, and economical.  It has failed to produce any evidence, other than self-serving statements and sheer speculation, regarding any of these elements.

-At depositions conducted prior to the recent hearing before the Nebraska Power Review Board, the NPPD’s designated representatives testified under oath that they hadn’t even seen any studies regarding the necessity of the project.

-They also testified under oath that the NPPD has no detailed engineering studies regarding the feasibility of constructing a line along the route that has been selected.  In fact, no representative of the NPPD has even seen the vast majority of the route in person.  The NPPD simply drew a line from point A to point B on a map without even considering the characteristics of the land it crosses.

-There is no evidence that the methods the NPPD claims it can use to construct the line will work on the extremely large hills that dominate the proposed corridor without causing massive damage to the fragile Sandhills.

-The NPPD also admitted that it has no plan regarding how it would access the transmission line in the event it is damaged by ice storms or other natural occurrences.  Most of the line is completely inaccessible from existing roads.

-The NPPD’s claim that the proposed route is the most economically feasible route is also seriously flawed since the compensation model it has outlined, which only takes into consideration the land over which the line crosses, is contrary to Nebraska law.  Nebraska law clearly provides for additional damages, such as the reduction of the overall value of the property caused by the line.  The NPPD is also using dated and obsolete information regarding the current value of the land over which the line will cross.  If current values were used, and the reduction of the overall value of the entire property cause by a transmission line was taken into consideration, the current proposed route would not be the most economical location for the line.

-The NPPD’s representatives have also testified that there are other existing corridors along which the R Project could be constructed, such as along Highway 20, that would avoid damaging the fragile Sandhills, and make the line much more accessible and safer to work on.

-The fact of the matter is that the State of Nebraska does not need the R Project.  The R Project is driven by the demands of the Southern Power Pool and its real purpose is to transmit power across Nebraska to other parts of the nation, much like the purpose of the Keystone Pipeline was to transmit oil across Nebraska for out of state interests.

-The NPPD claims that its mission is to serve the energy needs of Nebraska, but in reality, it is a profit seeking entity whose CEO earns over $465,000.  The NPPD’s business model is based on using its status as a quasi-governmental entity to steal land from Nebraskans over which to build transmission lines that generate a profit for NPPD and out of state interests.

-The landowners of ________________ County will not stand by and allow out of state interests and NPPD executives who are paid hundreds of thousands of dollars a year to steal our land and destroy the Sandhills.

-First, we will appeal the Nebraska Power Review Board’s rubber stamping of the project, which occurred after a phony hearing and without due process.

-Second, we will not negotiate with or grant the NPPD easements over our property, and will fight any attempts to exercise eminent domain in court.

-Quasi-government entities like the NPPD that are attempting to build lines just like the R Project in other states have recently been defeated in court because they cannot prove that their projects, driven by out-of-state interests and the Southern Power Pool, are necessary.

-For any of you here tonight who haven’t gotten involved in this fight yet, I ask you to join us.  Do not allow the NPPD to intimidate or mislead you.  We must stand together and speak as one.  Please do not negotiate with the NPPD or grant an easement across your property.  Got to Save the Sandhills profile on Facebook and contact us for more information regarding how you can save your property and save the Sandhills.

A full schedule of all hearings is below.  More information can be found on the NPPD website at http://www.nppd.com/rproject/