The letter clarifies for TransCanada what citizens knew all along — that local governments play a crucial role in regulating pipelines to protect their communities.

But TransCanada has been telling a much different story to our local county boards and zoning commissions.

Their lawyers have been trying to intimidate our local elected officials — using threats of legal action against small towns to try to scare them away from enacting regulations on pipelines like Keystone XL. Attorneys for TransCanada regularly show up at local county board and zoning meetings in Nebraska, with threats that any attempts to regulate their pipeline will end up getting the county sued in court.

Here’s an example: A letter TransCanada’s lawyers sent to the Antelope County, Nebraska Board on July 26, 2013:

PHMSA came to Nebraska to meet with local officials and citizens in York County in late February 2014.

At the meeting, citizens gave PHMSA the letter above from TransCanada, and stated how frustrated they were that TransCanada sends these types of memos, and gaggles of lawyers to citizens’ meetings as they are trying to put in place legal and common-sense regulations to protect land and water, along with the health and economic activity of their towns.

PHMSA responded to citizens’ complaints this week by sending the letter below, addressed to TransCanada CEO Russ Girling, that confirms the role of local governments in pipeline safety. 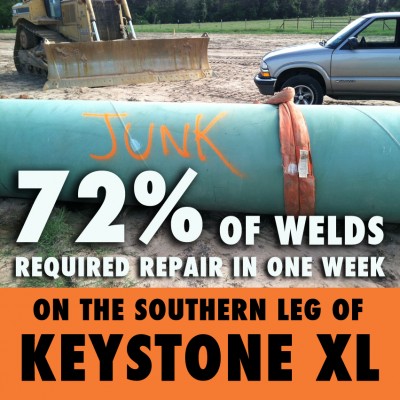 The letter from PHMSA comes in the same week that news came to light that the U.S. pipeline safety regulator has placed new safety restrictions on TransCanada after citizens documented shockingly shoddy work performed during the construction of the “southern leg” of Keystone XL, already in the ground in Texas and Oklahoma.

“The level of defects is indeed cause for alarm and indicative of something that is going on in the Keystone organization that isn’t satisfactory,” Bea told AP.