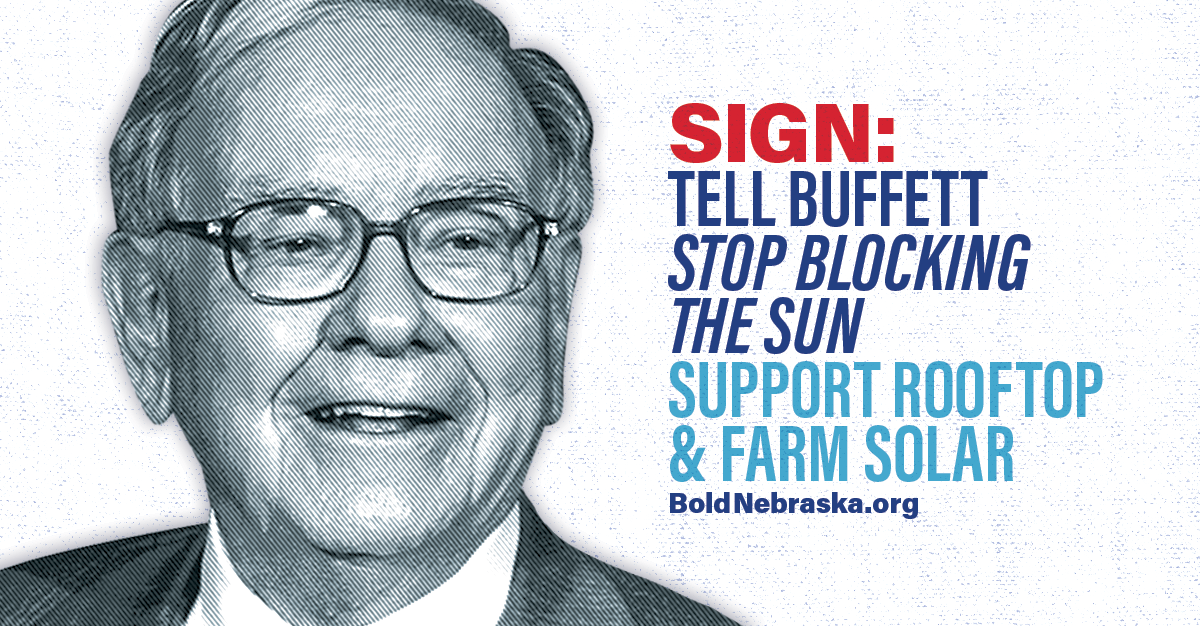 Warren Buffett’s utilities — along with others across the country — are mounting a coordinated effort to block the astounding growth of small, rooftop solar being installed by homeowners, farmers, ranchers and small businesses. (1)

It’s a cynical effort to eliminate competition for Warren’s own businesses, instead of complementing the investments being made by citizens across the country right now to #ActOnClimate by adding their own clean energy to the grid.

With his tremendous influence and respect in the world business community, Warren Buffett can be a leader and “Oracle” on climate change, by pursuing the new utility business models we need to accelerate our transition to clean energy.

On April 30th at the Berkshire Hathaway annual shareholder meeting in Omaha, Bold Nebraska’s Jane Kleeb joined world-renowned climate scientist Dr. James Hansen and others to advocate for a shareholder resolution and host a Climate Rally outside the meeting.

Update: More than 10% of Berkshire Hathaway shareholders voted YES on the Climate Risk Resolution — a sizable constituency, especially given the fact that Warren himself owns 1/3 of all of Berkshire’s shares and voted them against the resolution. (2)

Thanks for standing with us to #ActOnClimate.

Jane and the Bold Nebraska team

1. “Buffett Says He Loves Renewables, So Why Is His Company Trying To Kill Solar Energy?,” ThinkProgress, 3/7/16.

2. “Warren Buffett Faces Pressure to Invest for the Climate, Not Just for Profit,” InsideClimate News, 4/6/16.