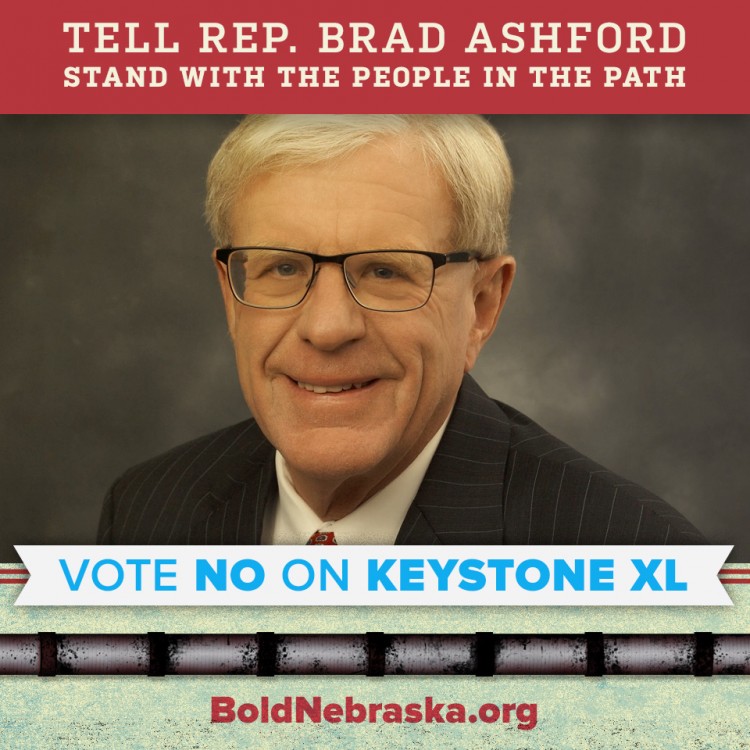 Nebraskans saw an opportunity to change the status quo in November when they elected Brad Ashford to represent them in Washington, giving the boot to Republican Rep. Lee Terry — who had served as the top cheerleader for the Keystone XL pipeline in Congress.

Farmers and ranchers have shared with us the many trite “form letters” they have received from Rep. Terry, Senators Deb Fischer and Mike Johanns, and the rest of Nebraska’s entirely-GOP Congressional delegation, demonstrating that their very real and valid concerns about protecting our land and water from the risky Keystone XL pipeline fell on deaf ears of their elected representatives.

We now call on Rep. Ashford to provide leadership and bring common sense to Nebraska’s Congressional delegation, and vote against the bill to fast-track Keystone XL.

As a Nebraska State Senator, Brad Ashford showed tremendous respect and an open mind when landowners brought their eminent domain concerns up with the committee he chaired in the state legislature.

“I have always fought tirelessly to protect our environment and conserve our natural resources with commonsense policies that consider the impact to our businesses and our communities,” Ashford told the League of Conservation Voters, upon receiving their endorsement.1 “I promise to always apply that same commonsense approach in Washington.”

We believe that Congressman Ashford would not support TransCanada’s current shady campaign threatening eminent domain proceedings against landowners, when the company has no legal pipeline route approved through Nebraska, and no legal authority at all right now to even exercise eminent domain.

We also do not believe that Rep. Ashford would support TransCanada’s current proposed route through Nebraska — which still crosses the extremely fragile Sandhills region and our precious underground water resource, the Ogallala Aquifer.

Folks here couldn’t be more pleased that Rep. Lee “Tarsands” Terry’s name is nowhere to be found on the latest wrong-headed bill to fast-track approval of Keystone XL that was introduced in Congress just this week.

We call on Lee Terry’s replacement — Rep. Brad Ashford — to reject Terry’s oil-soaked agenda, and stand with farmers, ranchers, tribes, and all those opposed to Keystone XL.