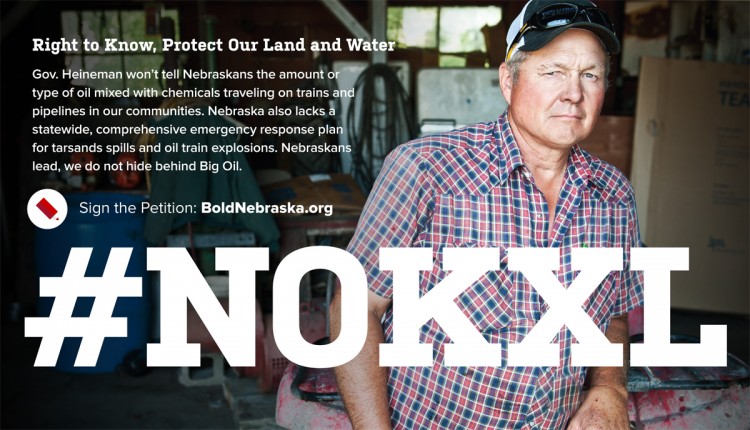 How many trains are carrying highly flammable Bakken crude oil through Lincoln, Omaha, and other Nebraska communities?

Exactly what mix of toxic chemicals is being pumped across our precoius farmland and drinking water supply in these pipelines carrying crude oil and tarsands?

How would our local first responders and doctors react to an oil train explosion or pipeline spill, and treat people who get sick if they don’t know what people have been exposed to? Who would manage the clean-up process and keep Big Oil accountable to the public?

The answer: We don’t know. And Big Oil wants to keep all this a secret.

But we as citizens have a right to know exactly what Big Oil is shipping through our communities, and to know the response plan for our communities in the event of a train explosion or pipeline spill.

Sign the petition calling for public disclosure of the dangers from oil-by-rail and pipelines.

Big Oil is fighting to keep information about how much and what type of oil and chemicals they are shipping from the public. They claim it’s because of “national security” threats or concerns over trade secrets, but we know the reality is they fear a backlash if the public knew the actual volume of potentially exploding oil trains traveling through our communities, and all the deadly chemicals they are piping through our land and water.

The U.S. Federal Railroad Administration rejected Big Oil’s claim that disclosing details of oil train traffic would be a threat to national security.(1) Anyone near the tracks could sit back and count the number of in some cases mile-long oil trains passing through their town every day; not knowing what’s in those trains is the real security threat.

Nebraska has no coordinated plan across all state and local agencies to deal with a large pipeline spill or oil train explosion. When you start to ask the detailed questions of who will handle the spill, where is the equipment located, how will doctors get the information on the chemicals in the oil spilled — you quickly realize that no one really knows, and no one is analyzing risks to coordinate an emergency response plan.

A growing number of states are refusing to cower to Big Oil’s unreasonable demands to hide this information from the public, countering that the public has a right to know about these risks, that it will increase community awareness of the threats, and that the confidentiality requests in some cases violate state open records laws.(2)

For example: Iowa, North Dakota, Montana, Idaho, Wisconsin, Illinois, Oregon, Virginia, Florida and Washington state have balked at Big Oil’s demands and say they will disclose details on oil trains through their communities, while South Dakota, Colorado, New York, New Jersey and other states are considering it. Iowa just disclosed that at least 3 million gallons of explosive Bakken crude travels by rail through the state each week.(3)

Nebraska Watchdog even made a public records request to state officials for oil train traffic data provided by the railroads — but their request was denied.(5)

When you ask these same agencies about a response plan for oil and tarsands pipeline spills, you get fingers pointing and no clear answers.

We petition Gov. Dave Heineman to compel all oil companies to disclose on a public website details on the amount and type of oil traveling by rail through our communities on a daily basis, and a list of all chemicals — like cancer-causing benzene — being mixed with tarsands and pumped through Nebraska on pipelines.

We also call for the creation of a multi-agency statewide task force that includes representation of citizens, landowners and environmental groups that will analyze current emergency response plans, and take a full account of the risks from oil traveling by rail and pipeilne through our state.

Nebraska can follow the leadership of Michigan, which recently took this critical and long overdue step of creating a task force to review pipeline safety in order to protect land, water and public health.(6)

The tired excuses that, “We have pipelines all over the state,” and “Trains go through our town every day” simply do not live up to the obligation our state has to step up and take action.

We all drink clean water and we all cherish our homes. Let’s protect our great state and stand up to Big Oil.