The election season is here and we think it’s time for New Energy. Bold Nebraska partnered with landowners, citizens and leaders in our state to create the New Energy Voter PAC as a place pipeline fighters, new energy lovers and water warriors can get information on candidates.

Click here now to give $25 to support New Energy candidates in key races.

The TransCanada pipeline has been a key issue in our state since 2008, yet it is rare to find a candidate talking about the safeguards we still need to protect our land, water, air and climate.

Wind and solar power are loved by most Nebraskans, yet political leaders have yet to pass any real goals for sustainable energy in our public-power state.

We have new faces — young people, farmers, ranchers, Tribal communities, Latinos, moms, African Americans — who took action on issues critical to our families, yet when we look over our shoulders, we find lots of citizens — but few political leaders standing with us on key issues facing our communities and families.

We can complain. We can sit here and say our state is run by a few at the top that hold one set of values with no room for others.

Let’s show our Pipeline Fighting power and bring new energy to the polls on May 13th.

WHAT IS A VOTE RECOMMENDATION?

We are doing our best to help inform Nebraskans about the best candidates in this crowded primary election. We do not cover all the races you will see on your ballot, but we hope we cover critical races that have a role in clean water, landowner rights and renewable energy.

These are recommendations; your vote is sacred and candidates should earn it.

In some instances, we suggest voting for a candidate who supports the pipeline. This will only hold true for the primary election on May 13, 2014.

These are vote recommendations, not endorsements. We will endorse candidates for the general election in November, as well as work to mobilize volunteers and raise money for those that earn our endorsement.

For the May 13th primary, however, we recommend strategic votes. In some races, voters are faced with a crowded field of candidates who do not represent our values.

We, the Pipeline Fighters, need to prove our electoral power. After the primary results, we will hit the “reset” button and have a new list of candidate suggestions for your vote in the general election, which takes places Nov. 4, 2014. It is critical that you vote in both the primary and general elections.

Independents: As a registered Independent in Nebraska, you can choose to take a Democratic, Republican, or Libertarian ballot on May 13th. The Republican Party in Nebraska is not allowing Independents to vote in state offices for primary, which is very unfortunate. So, if you opt to take a Republican ballot, you will only see House and U.S. Senate — the Gubernatorial and local partisan races will not be on the ballot. If the U.S. Senate and House races are important to you, we suggest asking for a Republican ballot. If you live in the Omaha area, we strongly suggest that you take a Democratic ballot so you can vote for a Public Service Commissioner. If you live outside of Omaha, we strongly suggest that you take a Republican ballot.

Republicans: The primary field is crowded on the Republican (GOP) side and our collective votes can make a huge difference in who battles it out for our votes in the general election. Remember, although the candidates we suggest that you vote for in the primary election may be in support of the Keystone XL pipeline, these votes are strategic — and we ask that you help us inform friends, family, and neighbors about the strategic reason to vote the same way. Voting as a united group of citizens with a clear plan of action is the only way we will change the status quo through the electoral process.

Democrats: The critical race on the Democratic side for the primary campaign is for the Public Service Commission (PSC) in the Omaha area. Most of the other Democratic races have only one candidate running.

Note for Republicans: There is only one Republican running for PSC, so you will only see one name on the ballot. You can always write someone else in.

There are 17 seats open this year in the Nebraska State Legislature. We have only made recommendations in races that have tough primaries where a candidate is running who is against the pipeline. For the general election, we will give a more comprehensive voter guide for the State Senate.

For folks wondering about Tyson Larson, we do not think he has done anything on property rights to deserve a second term. There are only two candidates in the race, so both will be on the ballot in November. We will post more on that race after the primary.

Click to tweet: We showed @TransCanada our power. On May 13, Pipeline Fighters will vote for #NewEnergy: boldnebraska.org/primary #NoKXL #nokxlVOTE 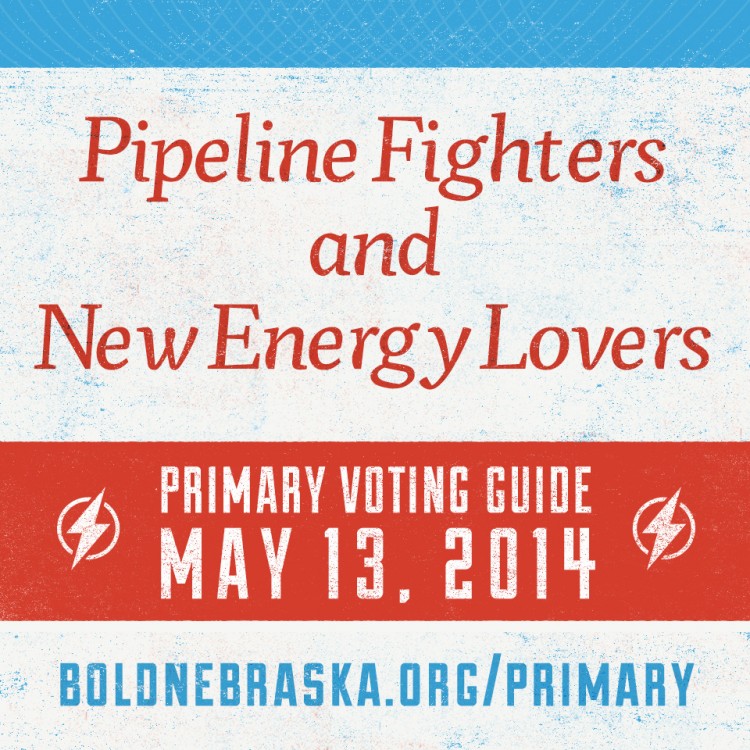 Bold Nebraska has partnered with landowners, citizens and leaders in our state to create the New Energy Voter PAC for one purpose—to help elect candidates that support the development of clean energy, and oppose tarsands pipelines that threaten our water and property rights.

We are setting out to prove that Pipeline Fighters act in the streets, and in the voting booth. Politicians try and dismiss us for not having electoral power. We aim to prove the naysayers wrong, as we have done many times before.

For the November elections, we will endorse candidates at all levels, from U.S. Senate to Nebraska Public Power District, to Natural Resource Districts. Candidates that earn our endorsement will get our support on social media networks; we will send volunteers to help them knock on doors; and we will raise small donations to help support the candidates’ races. We only endorse candidates who are for clean energy development, and against tarsands pipelines that threaten our water and property rights. For the Primary elections, we are making clear recommendations in the crowded field of candidates.

New Energy Voter PAC is a project of Bold Nebraska, landowners and citizens who want to see  to see clean energy, clean water and property rights protected and a priority.