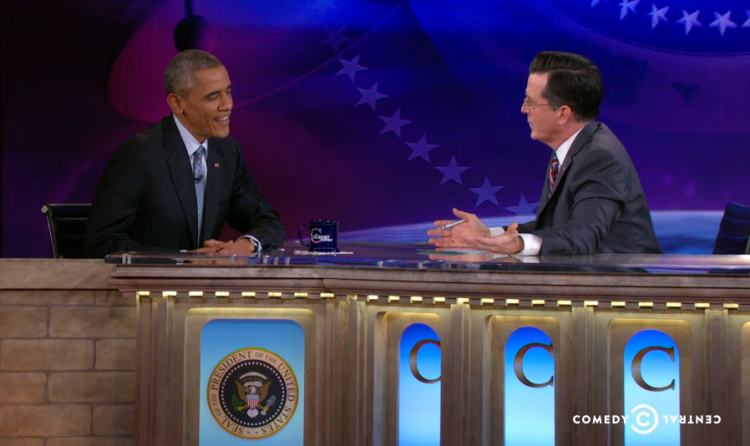 President Obama appeared as a guest on “The Colbert Report” on Comedy Central on Monday, and Stephen Colbert asked him about the Keystone XL pipeline (which gets a “boo” from the audience).

The President again reiterated his contention that the pipeline must not add to the problem of carbon pollution and climate change, that KXL is an “export” pipeline that won’t help gas prices in the U.S., and that it would create few jobs.

Here is the full transcript of Pres. Obama’s response on Keystone XL:

“Keystone is going through an evaluation process. Right now it’s being held up by a court in Nebraska, which is making a decision about whether the route is legal or not. In the first instance, I don’t make the initial decision, the State Department evaluates it. … What I’ve said is… if we look at this objectively, we’ve got to make sure that it’s not adding to the problem of carbon and climate change. These young people are going to have to live in a world where we already know temperatures are going up, and Keystone is a potential contributor of that. We have to examine that, and we have to weigh that against the amount of jobs it’s actually going to create, which aren’t a lot. Essentially there’s Canadian oil passing through the United States to be sold on the world market. It’s not going to push down gas prices here in the United States, it’s good for Canada, it could create a couple thousand jobs in the initial construction of the pipeline. But we’ve got to measure that against whether or not it is going to contribute to an overall warming of the planet that could be disastrous.”

Keystone XL clearly flunks the President’s own climate test, and he has all the information he needs right now to REJECT the pipeline.