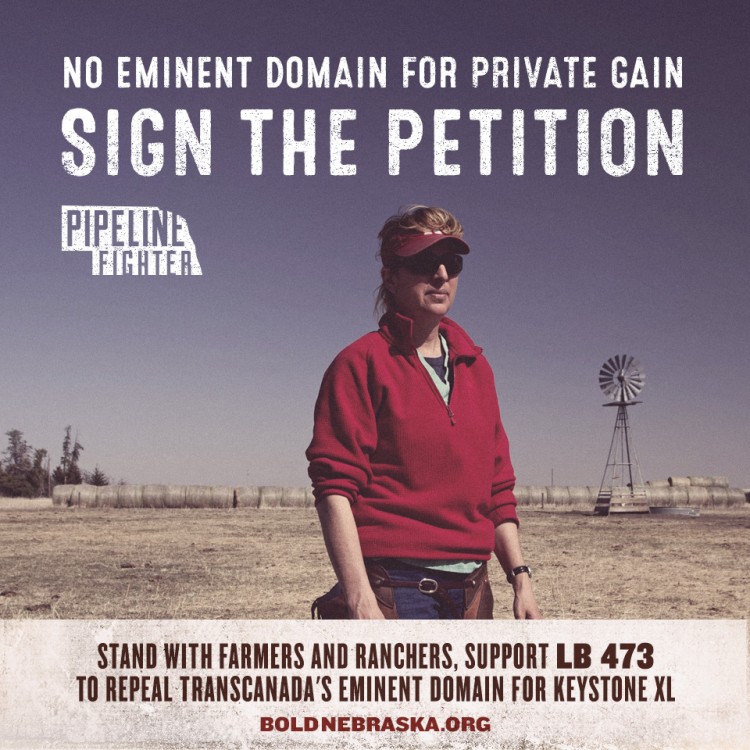 Farmers and ranchers in Nebraska are being dragged into court right now by a foreign corporation armed with the power of eminent domain to seize their land against their will to build the risky Keystone XL pipeline.

The legal concept of “eminent domain” allows for taking of land from private citizens by government when it serves “the public good” — such as for a highway, school, or courthouse that would benefit everyone.

But after intense lobbying by Big Oil, Nebraska’s state legislature passed a bill (LB 1161) that granted the power of eminent domain to TransCanada — a foreign oil corporation — to build an export pipeline for private gain.

A hearing on Sen. Chambers’ LB 473 is tentatively scheduled for March 11. On that day, this petition will be delivered to State Senators as they hear testimony from farmers and ranchers who are standing up to protect the land and water they have stewarded for generations.

Keystone XL would not in any way benefit “the public good.”

Not only does the pipeline threaten the precious Ogallala aquifer and fragile Sandhills soils that Nebraskans depend on for life and our livelihoods, but it would also serve no benefit to U.S. energy independence when the tarsands it carries is exported to China and world markets.

As an infrastructure project, Keystone XL would create no more jobs than a medium-sized shopping mall during construction, and then just 50 total permanent jobs.

But since the Nebraska legislature armed TransCanada with the power of eminent domain, the company is now taking farmers and ranchers to court to seize their land against their will for Keystone XL.

“The pipeline is like King Kong, and the people and farms are like ants and grasshoppers,” said State Sen. Ernie Chambers, the author of LB 473. “If they get in the way, they will be crushed with no redress.”

Sign the petition to support Sen. Chambers’ LB 473: No eminent domain for private gain in Nebraska.

We’ll send an update when the hearing date for LB 473 is confirmed, along with details on testifying at the hearing and how to submit testimony if you’re unable to attend.