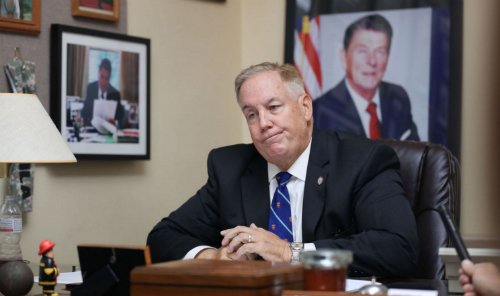 Despite this shocking revelation, Kintner told reporters he refuses to resign his seat in the Nebraska Legislature.

“I think I’m where I should be right now,” Kintner said. He further went on to say his illegal activity was “sexual sin” and “is the way Satan gets to us.”

The Omaha World-Herald reports that the Nebraska State Patrol transcript of the actual videos with the prostitute includes this exchange:

Governor Pete Ricketts knew about Kintner’s sex tape for *an entire year* and did not tell the public. In fact, with full knowledge of the allegations of Kintner’s serious and illegal violations, Ricketts selected him to be a Republican delegate to the Nebraska State GOP Party Convention.

Both Ricketts and Kintner have violated the public trust. We further call on Sen. Kintner to disclose everything Gov. Ricketts knew about his cybersex scandal, and the year-long cover-up.

Add your name to the petition calling on Sen. Kintner to resign immediately.