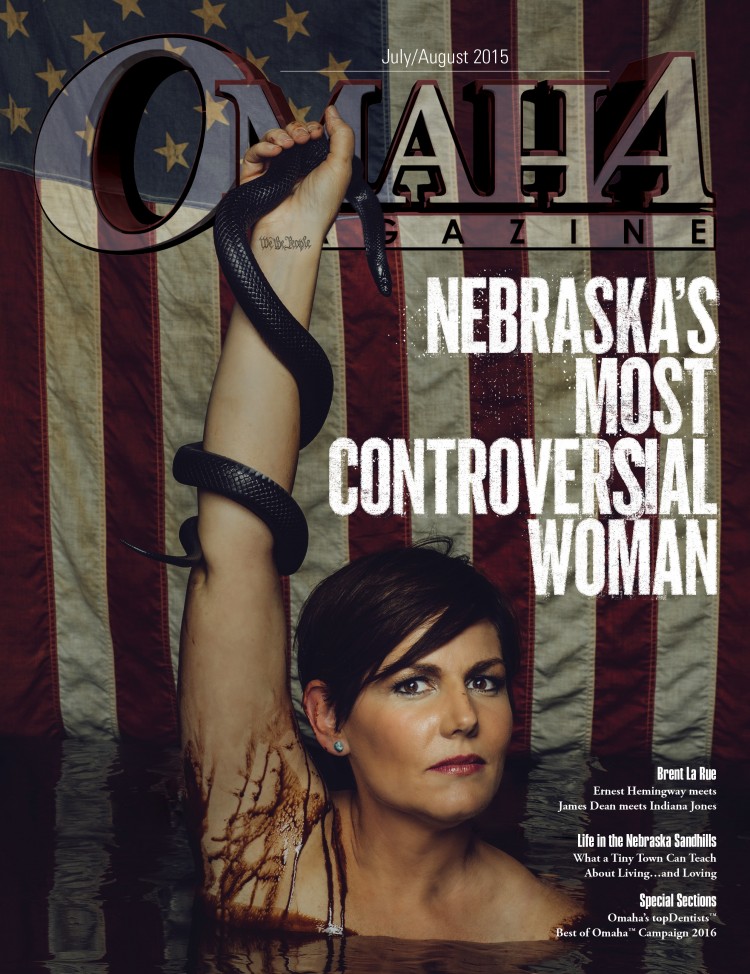 Bold Nebraska and director Jane Kleeb are featured on the cover of the July/August 2015 issue of Omaha Magazine. Read the feature story on Bold Nebraska below, beginning on page 140. You may also purchase a printed copy of Omaha Magazine at this link, and attend the magazine Launch Party on June 29. Jane has a message about the article below as well to all of our supporters.

Dear Bold Supporters and All the Pipeline Fighters,

We are super proud of the Omaha Magazine cover and of all the pipeline fighters who stood their ground for the past 6 years to protect the land, water and property rights. Omaha Magazine put up a link so folks can buy a copy of the magazine: http://omahamagazine.com/jane/

Please do purchase a copy of the magazine and share the story with your Facebook friends and Twitter followers. The more outlets like Omaha Magazine sees that the public wants to read stories about “we the people” standing up, the more press and magazines will cover our collective stories–whether thats folks fighting fracking, restaurants using local food or everyday citizens putting up solar on their rooftop (or food truck, go Pepe!).

I wake up every day ready to stop the pipeline. I go to bed every night thinking of landowners and Tribal nations in the proposed path. Here we are, six years later, still standing. Standing with Randy, standing with our heads held high, standing with seeds of resistance.

Thank you to everyone for each small and large action. Traveling for hours on a bus to a march; getting arrested in front of the White House with farmers, priests and the likes of Daryl Hannah, Bill McKibben and Mark Ruffalo; listening in awe to Greg Grey Cloud proudly sing in the Senate gallery; working in the wind and pouring rain to make a crop art image to Barack Obama; carving 91 pumpkins to symbolize the 91 spills that would come with KXL; praying with faith leaders; plating Ponca scared corn; circling the Gov’s mansion with flashlights to shine some accountability on the man; recording an album using solar energy in the barn we all built with @Hear Nebraska and @Sower Records; raising tepees (thanks @Wica Agli brothers) in the boiling sun on the National Mall and riding horses with pride; and rocking out with family farm champion Willie Nelson, Lukas Nelson & Promise Of The Real, Frank Waln and our “stand up” man Neil Young.

You stopped the pipeline in its tracks and you made this cover happen. Now, we still have a very active pipeline fight ahead of us since the President seems to have lost his reject pen. So stay in touch with Bold Nebraska Facebook page for next steps like joining the farmers and ranchers in their next court date against TransCanada Corporation July 27th to defend their property rights.

Huge props to the folks who made the Omaha Magazine cover happen:

*Photo by: Bill Sitzmann / with creative direction from John Gawley and the entire team at Omaha Magazine
*Make up by: Cari Maxwell with GARBO’S SALON & SPA – REGENCY and her personal site here: http://carijmaxwell.com
*Hair by: my trusted stylist and strong single mom who I laugh and complain to like a sister Lindsay Epperson with Jet Salon
*Snake trainer: Andy Reeves who brought a Black Mexican Kingsnake I called Lilith
*I don’t have on any clothes to tell you about in the cover photo :)…except the earnings I bought from John L Pappan at the Omaha Tribe of Nebraska Earth Day booth this year
*The entire Bold and NEAT team (Amy, Mark, Ben) who always stand ready to help, lead and organize. I can not imagine a stronger team to keep our fight alive