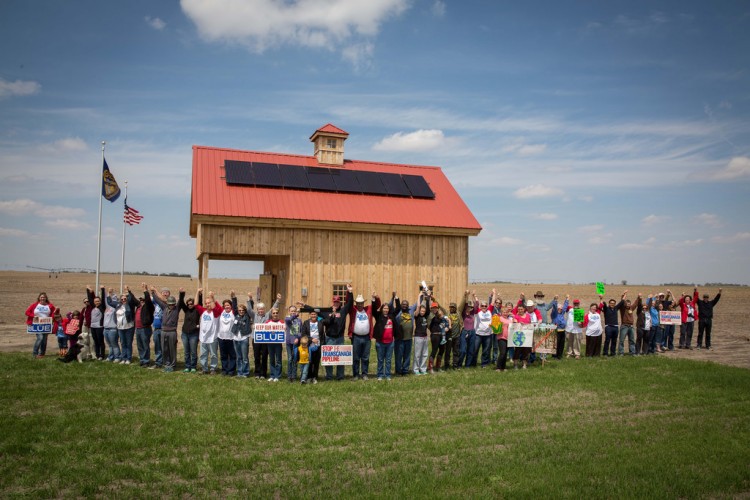 In January 2015, the New Energy Barn built in the path of the Keystone Export pipeline generated 261 kilowatt hours of clean energy onto Nebraska’s public power grid.  That’s enough energy to power a refrigerator for 58 days.

Omaha Biofuels Co-op Recycles Used Fryer Oil into Fuel: The Omaha Biofuels Coop, which is one of the Small, Clean and Local Project leaders identified in our Build Our Energy awareness campaign, has received attention for their effort to recycle used cooking oil into usable motor fuel.  This is just one of the many projects the Coop is involved with.  Find out more about the OBC at this link: http://www.omahabiofuelscoop.org/about.  To read the article, go to this link:  http://www.omaha.com/money/omaha-co-op-turns-used-oil-from-fish-fries-restaurants/article_7105cf7b-60e3-5c61-aad9-00aead95fa5a.html

Wind Farm Proposed in Butler and Saunders Counties: A 200-megawatt wind farm project that would generate enough electricity to power about 40,000 homes is being proposed in two Nebraska counties.  The “Jubilee Project,” proposed by the nations largest wind producer, NEXTera, has an estimated economic impact of up to $150 million in revenue for local governments and $16 million in payments to landowners.  Read more at this link:  http://journalstar.com/news/state-and-regional/nebraska/wind-farm-proposed-in-butler-saunders-counties/article_c317c3e1-ac0a-5a2c-8db3-c33c9c09eb46.html

More Debate on Powerline Impact to the Sandhills: Ranchers in the Sandhills continue to make their case about the potential damage to their property and to wildlife in the path of the proposed R-Project transmission line.  Nebraska Public Power District continues to demonstrate an unwillingness to compromise or make changes to the route.  Read more about the concerns of Nebraska landowners at this link: http://journalstar.com/news/state-and-regional/nebraska/sandhills-power-line-scar-on-the-land-or-gateway-to/article_ee7371c3-5b70-5dc0-a750-82f644ab6c15.html

Citizen and Environmental Groups Propose 10 MW Community Solar Program in Illinois: Two groups focused on renewable energy have introduced a proposal in Illinois that would implement several community renewable energy projects that could total as much as 10 megawatts of community solar production.  Though Illinois has a net metering law, participation has been slow.  Renewable energy advocates believe that more community-based involvement and investment will be another way to increase solar energy production in the state.  Read more at this link: http://www.midwestenergynews.com/2015/03/05/groups-propose-community-solar-program-for-illinois/

Wind Without Subsidies will be Cheaper than Natural Gas in 10 years: Citing decreasing costs, improvements in technology, and increases in efficiency as major causes, the U.S. Department of Energy announced that within the next 10 years, wind power will cost less than natural gas, even after the federal Production Tax Credit for wind expires.  Coupled with a decrease in carbon emissions as well as a reduced risk of water contamination and reduced use of water, it is apparent that wind, not natural gas, will be one of the major energy sources of the future.  Read more at this link: http://www.bloomberg.com/news/articles/2015-03-12/wind-energy-without-subsidy-will-be-cheaper-than-gas-in-a-decade