Nebraskans to Join Nationwide Rally in Solidarity with Tribal Nations, Farmers on Tuesday to Protect Our Water from the Dakota Access Pipeline

Omaha — Nebraskans will participate in a Nationwide Day of Action on Tuesday, in solidarity with the Standing Rock Sioux Tribe and thousands of Pipeline Fighters assembled at the Camp of the Sacred Stones in North Dakota — and Iowa farmers and landowners fighting eminent domain for private gain and protecting our land, water and climate.

The rally will take place during a “Vote by Mail Party” at the Waiting Room Lounge that’s co-sponsored by Bold Nebraska, which will provide attendees with the opportunity to register to vote or update their registration, and receive instructions on how to apply for and complete a vote-by-mail application and ballot.

Speakers at the event will include Larry Cohen — chair of the new “Our Revolution” organization launched by former Bernie Sanders campaign staffers, and Bold Nebraska’s Jane Kleeb, who was recently named to the board of Our Revolution. Tuesday’s event will also feature live music provided by Bolzen Beer Band, and a live art installation by Native artist Bunky Echo-Hawk, focused on Dakota Access.

This is the most high profile environmental fight in our country right now, and President Obama has the power to intervene and stop this pipeline in its tracks, just like he did with Keystone XL. The nationwide Day of Action will include Senator Bernie Sanders speaking alongside tribal leaders at the solidarity event happening in Washington, D.C.

The Dakota Access pipeline would carry 450,000 barrels of dirty oil per day from North Dakota to Illinois, cutting through land and water sacred to the tribes, and threatening the livelihoods of Iowa farmers. Worse, the pipeline would cross under the Missouri River, threatening drinking water downstream if a catastrophic oil spill occurs.

Led by Native Americans, a massive wave of inspiring grassroots opposition is building, with protests and civil disobedience temporarily halting construction in recent days. Farmers in Iowa are fighting the pipeline for illegally using eminent domain for private gain and have inspired actions all across the state. In response to a likely Federal District Court Ruling on the case brought by the Standing Rock Sioux to protect their water and sacred cultural sites, thousands will rally and call on the President to stop this project and stand with Standing Rock. 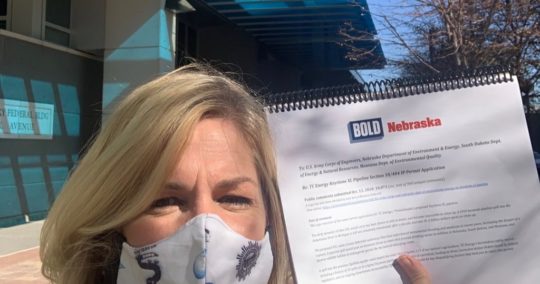