MSNBC’s “The Ed Show” host Ed Schultz announced on Friday on his show that he will come to Nebraska to visit with landowners, farmers and ranchers who are in the path of TransCanada’s proposed Keystone XL pipeline. They are facing threats of eminent domain from a foreign corporation, that would force them to give up their land against their will and also their own strong objections to the pipeline.

We’re excited to welcome Ed and his team to Nebraska to meet our Pipeline Fighters, hear their stories, and see firsthand the agricultural land they have stewarded for generations and won’t stand to see endangered for a risky foreign tarsands export pipeline. We’ll be sure they all get to taste some Nebraska Sandhills beef and some pure, tarsands-free water straight from the Ogallala Aquifer, too!

This past week, Ed took a tremendous amount of heat for coming out in favor of the pipeline. Ed says in the clip below that his pro-KXL position isn’t popular with “liberals,” but we know that there is a broad coalition opposed to this pipeline — just ask Nebraska rancher Randy “Stand With Randy” Thompson or the many other registered “R”‘s in rural Nebraska who know it is all risk and no reward for America and our planet.

We have great respect for Ed’s staunch support of unions and the labor movement, but it’s been a shame to hear Schultz parroting the same Big Oil industry talking points that we have been hearing from TransCanada and the American Petroleum Institute (API) for years now in this pipeline fight. We very much appreciate Ed inviting Bold Nebraska director Jane Kleeb onto his TV and radio shows this week, as well as other pipeline opponents like ClimateProgress.org founder Joe Romm and “Gasland” director Josh Fox. We’re encouraged by his commitment to come to Nebraska and meet landowners enduring TransCanada’s shady dealings and threats of using eminent domain to take their land and endanger their livelihoods with a tarsands pipeline.

In the following clip, Ed speaks with Teamsters Union (IBT) president James Hoffa about KXL and jobs. Even the President has debunked the industry’s puffed up jobs estimates from the pipeline, correcting Fox News host Bill O’Reilly by stating it would create at most “a couple thousand” jobs during construction, and then as few as 50 permanent jobs after construction is completed. At the end of the clip, Ed announces his plan to come to Nebraska to meet the people in the path of Keystone XL. 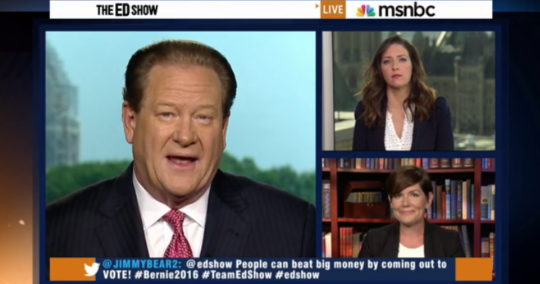 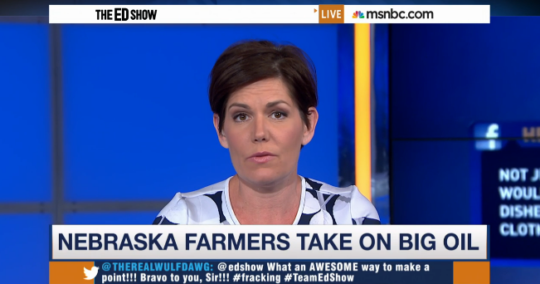