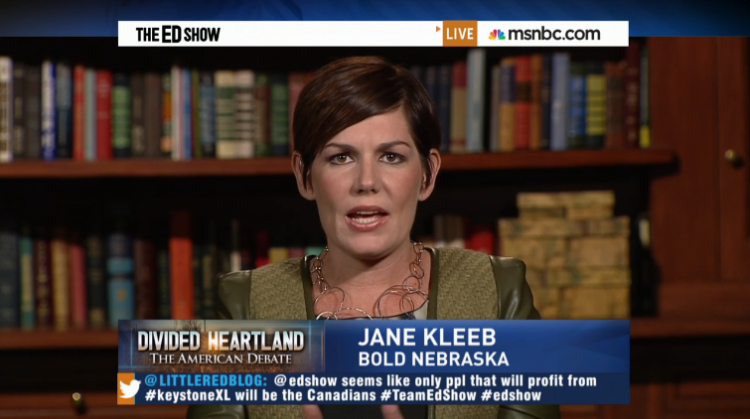 Bold Nebraska director Jane Kleeb appeared on MSNBC’s “The Ed Show” on Tuesday, Aug. 26, to talk about the climate impacts of the proposed Keystone XL pipeline. The discussion centered on a new study from Nature Climate Change that suggests Keystone XL’s greenhouse-gas emissions have been underestimated in the U.S. State Dept’s Environmental Impact Statement on the pipeline, and would actually be four times worse than predicted.

Jane also provided an update on the upcoming Nebraska Supreme Court hearing on Sept. 5, when three landowners challenging the unconstitutional state law (LB 1161) that fast-tracked approval of the KXL pipeline route in Nebraska will defend their victory at the lower court.

Click here to RSVP to attend the hearing, and our post-hearing Concert Rally in Lincoln.