Ricketts Ignores Nebraskans, Kicks the Can on Clean Energy
with Lawsuit to Stop Nebraska Energy Plan

Lincoln — Gov. Pete Ricketts and Atty. General Doug Peterson on Friday joined other states in filing a lawsuit that aims to block the Clean Power Plan, President Obama’s flexible, common-sense rule that will cut power plant pollution and provide climate protection and public health benefits that will save thousands of lives each year.

Nebraska is required to submit a plan, written by our state experts, that outlines how we will reduce carbon pollution in our state by 40% by the year 2030. The lawsuit filed by Ricketts puts Nebraska at risk of accepting a plan written by the EPA instead of our state’s experts.

Bold Nebraska and Nebraska Sierra Club last week organized a game of “Kick the Can” outside Governor Ricketts’ mansion, with the message that he should not kick the can on submitting a Nebraska state energy plan that will put us on target to comply with Clean Power Plan goals. Gov. Ricketts ignored the calls of citizens to support the Clean Power Plan (including over 2,500 petition signatures) by joining this lawsuit today.

“Governor Ricketts cares more about the needs of Big Oil and Big Coal rather than creating jobs and clean energy right here at home,” said Jane Kleeb, Bold Nebraska director. “Just yesterday, I was with a farmer who installed a 25 kW solar system, built by fellow farmers, that will now put clean energy on the Nebraska grid and reduce carbon pollution — but also shows how small, community-based energy can reduce load issues that plague our current system. It is time for Gov. Ricketts to let go of the dirty energy of the past, and stand with citizens who are building our clean energy future.”

“We knew polluters and their allies would throw everything they’ve got at the Clean Power Plan, and we expect them to fail,” said Graham Jordison, Nebraska Sierra Club. “Just last week, thousands of Nebraskans spoke out to Governor Pete Ricketts, calling for a strong state plan to meet Clean Power Plan goals by bringing clean energy jobs and new businesses to the state of Nebraska. While Governor Ricketts and Attorney General Doug Peterson have made the short-sighted decision to side with polluters and against progress, the reality is that the Clean Power Plan is based on a law passed by Congress, upheld by the Supreme Court and demanded by the American people.”

Bold Nebraska and Nebraska Sierra Club call on Gov. Ricketts to support the Clean Power Plan, rather than follow this path of obstruction and costly litigation using our taxpayer dollars.

Instead of focusing our state’s efforts on producing a state energy plan for Nebraska, the “Platte Institute” he founded is organizing a panel called “Clean Power Plan: Unworkable and Unaffordable” at an event later this month where the Governor himself is scheduled to provide the keynote address. What’s more, one of the confirmed speakers on this panel is NPPD board member John McClure. We strongly object to a member of our publicly-owned utility supporting this panel and speaking out against any effort to combat climate change by curbing emissions from coal-fired power plants. 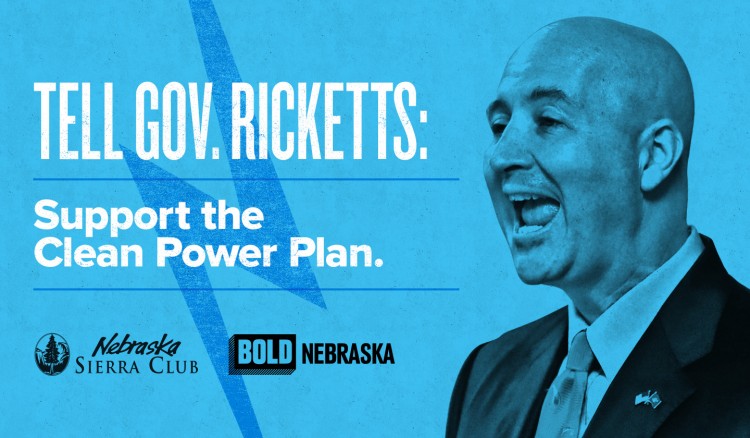