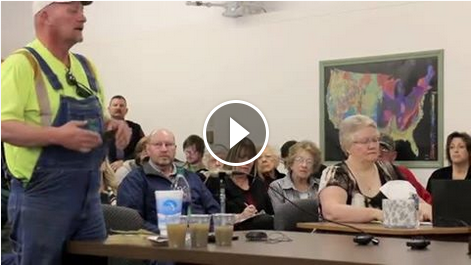 The Nebraska Oil & Gas Conservation Commission held a hearing on Tuesday, March 24 on an out-of-state company’s (“Terex” or “T-Rex Oil”) application to export its toxic fracking wastewater into Nebraska, moving 80 truckloads carrying 10,000 barrels per day of pollution destined to be dumped into a disposal well in Sioux County — transferring all the risk onto Nebraska farmers and ranchers.

The Commission claimed it could only allow 25 citizens inside the room at any time, during what it incorrectly called a “public” hearing under the state’s open meeting laws — despite no publication of an advance agenda, or reasonable accommodation of the number of citizens who wished to participate. Dozens of citizens waited outside on the sidewalk, unable to hear their neighbors’ and fellow Nebraskans’ testimony — which was nearly unanimously against the fracking well. What’s worse, the Commission has stated that, “None of the comments from the general public will be part of the official record of the hearing.”

Bold Nebraska and Nebraska Sierra Club believe open meetings laws were violated, and are exploring options on filing a complaint.

Nebraska State Sen. Ken Haar traveled all the way to Sidney while the Legislature was in session in Lincoln to testify against the well permit at the hearing on Tuesday, bringing with him a letter from fellow Sen. John Stinner (Scottsbluff) that urged that “the Commission should not take action on this application until all of the relevant factors have been taken under consideration.”

Sen. Stinner’s letter also broke the news that he will introduce a study resolution in the Legislature to consider the adequacy of the Oil and Gas Commission’s statutory authority in the area of the disposal of waste water, adding that the study “will address what should be done to protect the environment, our surface and underground water supply and public safety.”

We’re now calling on Natural Resources Committee Chairman, Senator Ken Schilz, whose District 47 includes Sioux County, and who represents the vast majority of citizens who testified at the Oil & Gas Commission hearing, to stand with Senators Stinner and Harr and join the call for a pause on this well permit until the Legislature can study the issue and ensure our water and natural resources are protected.

Bold Nebraska was able to record the majority of Tuesday’s proceedings, including all public comments, and the beginning of the second session where T-Rex was questioned by landowners within a half-mile of the proposed well.

WATCH: Landowner brings fracked water to the hearing, asks if Oil & Gas Commissioners would drink it

WATCH: Ken Winston of Nebraska Sierra Club calls for a rejection of the well permit and moratorium on new fracking wastewater disposal in the state

(*Camera battery dies at this point)