The Cowboy and Indian Alliance (CIA), a group of ranchers, farmers and tribal leaders — including almost 100 from Nebraska — launched a five-day “Reject and Protect” encampment on the National Mall yesterday to urge President Obama to “reject” the Keystone XL pipeline and “protect” their land, water, climate, and tribal rights.

The encampment began Tuesday morning with a traditional tribal ceremony in front of the Capitol reflecting pool. The alliance poured a bucket of water from Nebraskans’ family wells along the pipeline route into the pool to highlight the need to protect this sacred resource. Twenty tribal leaders and ranchers and farmers from Nebraska then led a procession on horseback from the Capitol to a group of nine tipis on the National Mall near the Natural History Museum. 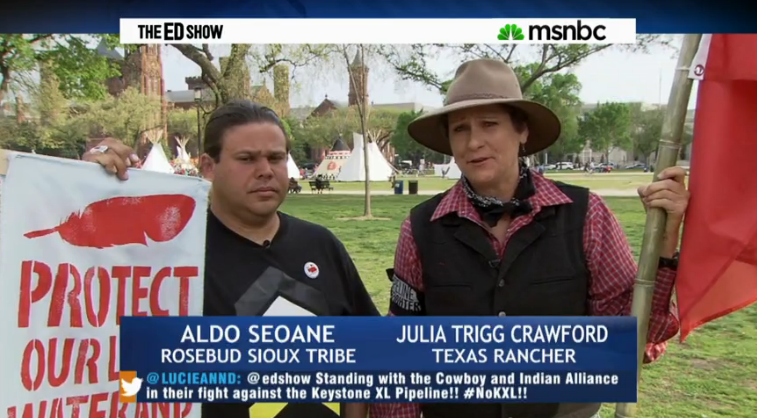 Aldo Seoane, of Oyate Wahacanka Woecun (“Shielding the People”) and Julia Trigg Crawford, a Texas rancher whose land has been taken from her for KXL South, appeared on MSNBC’s “The Ed Show” to talk about the Cowboy & Indian Alliance and this week’s Reject + Protect #NoKXL events in D.C.

The New York Times | Reuters filed this report from the Opening Ceremony of Reject + Protect:

NBC News was at the Opening Ceremony, and spoke with Nebraska rancher Ben Gotschall about the event.

The Wall Street Journal covered the Opening Ceremony, and interviewed members of the Cowboy and Indian Alliance including Nebraska rancher Suz Luebbe.