A year and a half ago, Mike and Cheri Blocher, a Nebraska family that raises horses and whose land lies in the path of TransCanada’s proposed Keystone XL pipeline, wrote a letter with their concerns to President Obama.

The Blochers, like all of you, wrote letters often to Pres. Obama in the hopes of getting through to him.

Last weekend, while we were all out in Neligh for the Harvest of the Sacred Ponca Corn, the Blochers surprised us all — with the response letter they had just received from the President!

Watch Mike and Cheri read their #NOKXL letter to President Obama, and the President’s response.

Donate now to support our ongoing work to stop the pipeline, to help protect the homes of families like the Blochers.

My wife and I own and operate a small ranch in Antelope County, Nebraska.  We raise quarter horses along with corn and soybeans on this land where she was born sixty-two years ago.  We plan to spend the rest of our lives here continuing the legacy of her late mother and father.

Imagine how shocked we were to learn of Trans Canada’s proposal to rip a trench across our land and lay a huge pipeline that would transport 832,000 barrels of a toxic mixture of tar sands and dangerous chemicals per day.  All pipelines eventually leak, and this company has a terrible track record of detecting and cleaning up their messes.  The image of one our new born foals floundering in a pool of black poison is more than we can tolerate.  A leak would decimate our land, water, and livelihood.  We should not have to risk everything in order to accommodate a big corporation’s greed.  This land and water means nothing to them but a faster route to billions of dollars more than they are already making.  It is also a quicker route to climate change and global warming.  Only when the total amount of pollution this project will produce is realized will we understand the terrible impact it will have.

We supported you during both of your campaigns and voted for you in both elections, something you realize was not popular in Nebraska.  We embraced your promises to preserve and protect the environment.  Please set an example for the rest of the world, stand by your word, and say no to the Keystone Pipeline permit request and  demonstrate that the United States is willing to lead the way to protect our ever shrinking planet. 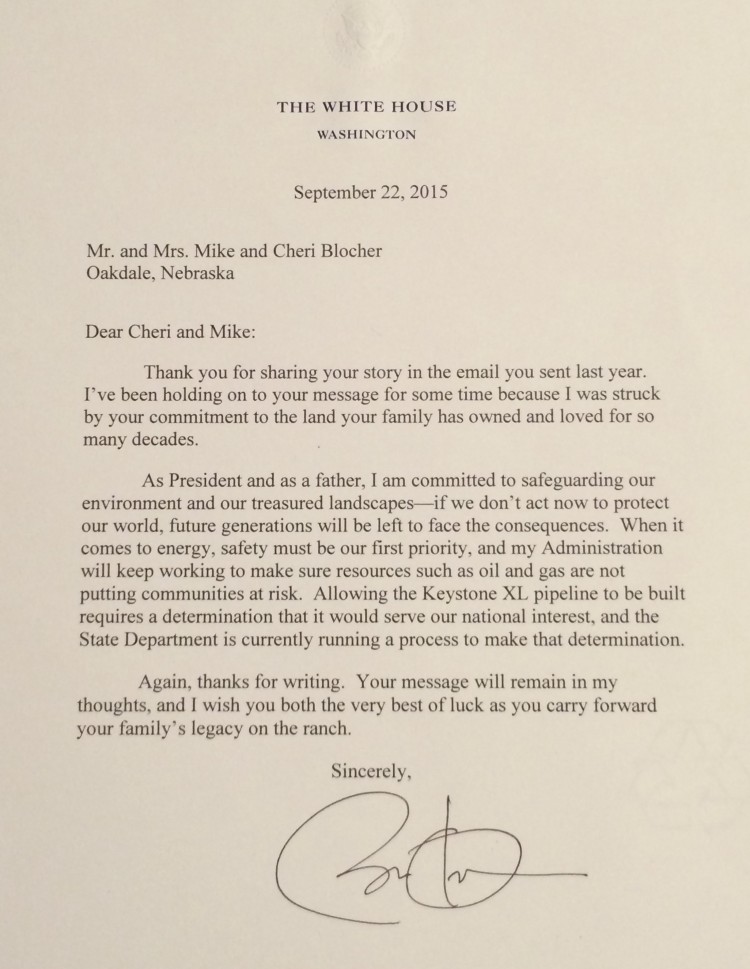 Thank you for sharing your story in the email you sent last year. I’ve been holding on to your message for some time because I was struck by your commitment to the land your family has owned and loved for so many decades.

As President and as a father, I am committed to safeguarding our environment and our treasured landscapes—if we don’t act now to protect our world, future generations will be left to face the consequences. When it comes to energy, safety must by our first priority, and my Administration will keep working to make sure resources such as oil and gas are not putting communities at risk. Allowing the Keystone XL pipeline to be built requires a determination that it would serve our national interest, and the State Department is currently running a process to make that determination.

Again, thanks for writing. Your message will remain in my thoughts, and I wish you both the very best of luck as you carry forward your family’s legacy on the ranch.

The momentum kept building this week when TransCanada turned tail and dropped their illegal route and eminent domain lawsuits against Nebraska landowners, who along with the team at Domina Law Group, had fought the company tooth-and-nail in court for more than two years.

TransCanada says it will now apply for a route review with the Nebraska Public Service Commission — a process that takes 7 months to a year.

We say it’s too little, too late, and TransCanada should have done this from day one — but their arrogance and deep pockets essentially bought them a process that violates our state constitution.

Meanwhile, the unconstitutional law (LB 1161) passed by the Nebraska Legislature that gave special favor to TransCanada to have their route approved by the Governor and be granted immediate use of eminent domain is still on the books in Nebraska — and we must take action to get rid of it.

Chip in to support Bold Nebraska’s constant pressure on Pres. Obama to reject Keystone XL, and our campaign to get the unconstitutional pipeline law LB 1161 off the books in Nebraska.

We all got goosebumps when we read Pres. Obama’s letter to the Blocher family.

We are convinced their letter made it through because of all the work you have done to help stop the pipeline and have your voices heard.

We continue to stand strong, and work hard towards the day Pres. Obama rejects the permit once and for all. We promise to plan one heck of a victory party!