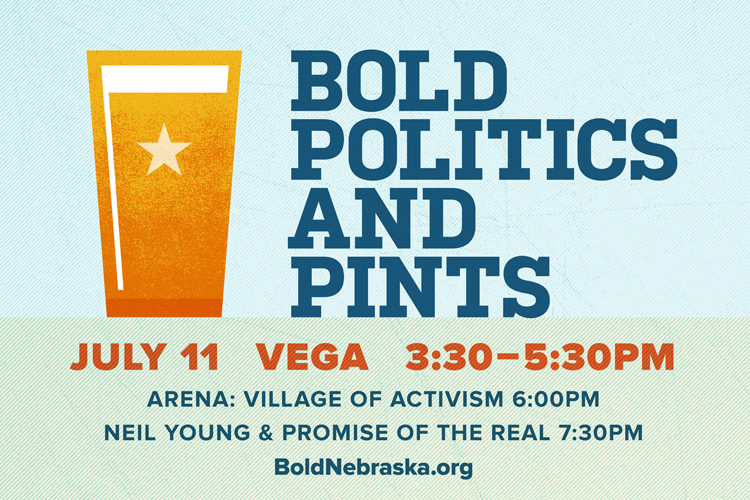 Neil’s new album is called “The Monsanto Years” (listen via NPR), and Politics & Pints will focus on the risks that corporation brings to farms and our food system, and other threats to our land and water.

Neil’s band on the “Rebel Content” tour will be a reprise of the lineup who backed him here in Nebraska last September at Bold Nebraska’s “Harvest the Hope” #NOKXL benefit concert on the Tanderup farm in Neligh, when he performed with co-headliner Willie Nelson’s sons Lukas and Micah — who play in their own country-rock band, Promise of the Real.

The Neil Young concert at Pinnacle Arena will also feature a unique “Village of Activism,” where nonprofits including Bold Nebraska, Nebraska Farmers Union and Center for Biological Diversity that are working on clean water, local food and climate change will have informational booths with petitions and other ways to take action, as well provide free swag for concertgoers.

“Mixing culture and politics is critical to bringing change in Nebraska and across the United States,” said Jane Kleeb, Bold Nebraska Director. “Neil Young, Lukas and Micah Nelson and the Politics and Pints speakers all carry a simple message—we the people get things done. From climate action, to stopping risky tarsands pipelines, to protecting our farms from big corporations, it is the people that bring change and the music of legends like Neil Young that keeps us inspired.”

“We are grateful that more attention is being brought to GMOs and Monsanto’s influence in the world. As a certified organic farm, we do not use or want to use genetically modified organisms,” said Evrett Lunquist, of Common Good Farm — one of the plaintiffs in the lawsuit OSGATA v. Monsanto. “We do have lots of alfalfa in our pastures that goes to seed occasionally. Insects and pollinators can bring in Monsanto’s patented Round-Up Ready, which then means we could be violating Monsanto’s patent license by having the GMO trait on our farm — and Monsanto would have the right to seek damages from us. Lawsuits, like the one we brought against Monsanto, are not providing the protection we need. Our elected officials must focus more attention to this matter just as Neil Young is doing with this tour.”

“We are all excited to welcome Neil Young, Lukas and Micah Nelson, and members of Promise of the Real back to Nebraska after their epic performances at Harvest the Hope,” said farmer and Harvest the Hope concert host Art Tanderup. “As citizens that are concerned about the earth we leave our grandchildren, Helen and I have taken steps to help preserve our planet. We use no-till farming methods to capture carbon and build soil health, and solar panels provide most of our farm’s electrical energy and power an electric hybrid car significantly that reduces our reliance on fossil fuels. Times have changed. This country can no longer be fossil fuel dependent.”

“Our work of solidarity with the Cowboy Indian Alliance and opposing the KXL pipeline, is focused on bringing awareness to the violence that is perpetrated against the front line communities’ women and children when this pipeline is built,” said Greg Grey Cloud, enrolled member of the Crow Creek Sioux Tribe and co-founder of Wica Agli. “Domestic violence and sexual assaults are already at extreme peaks toward our nations’ women and children, and 86% of the perpetrators are non-Native men. Building this pipeline would only add to the devastation that is ruining the lives of indigenous mothers, children and families.”

“The fracking industry’s federal and state exemptions are allowing human rights violations of epic proportions and they must stop immediately,” said Shane Davis, director of Fractivist.org and President of Boulder Hemp Farm. “We are smarter than a fossil fuel and can grow our way out of oil and gas dependency with plants like hemp which can safely replace all toxic petroleum based products and create food, fuel and fiber.”