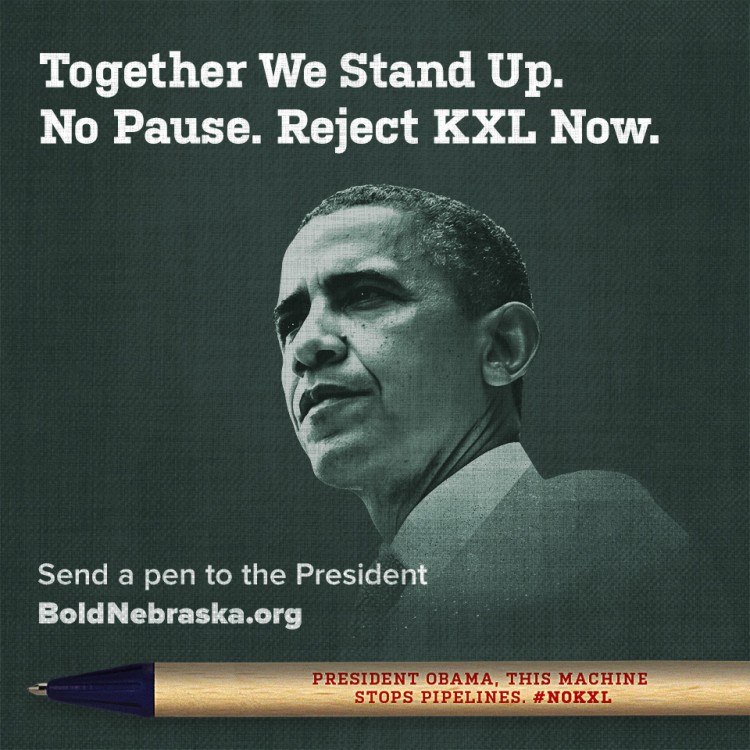 In a desperate move, TransCanada yesterday asked the State Dept. to “pause” its long-running review of the Keystone XL pipeline.

TransCanada says it wants the “pause” so that its recently-launched new application for a pipeline route at the Nebraska Public Service Commission — a process that takes 7-12 months — can run its course. The problem there is the PSC is not even sure it can legally review the pipeline route in Nebraska, so this avenue is pretty much a dead end for the foreign company.

We know this latest move by TransCanada is a blatant attempt to stall the process, until maybe a Republican who would approve the pipeline is elected President.

The State Dept. is under NO obligation to grant TransCanada’s request for a “pause.”

In fact, President Obama can end all this uncertainty right now with the stroke of a pen — and reject Keystone XL outright.

Inscribed on the eco-friendly pen is a simple message with a powerful meaning: “President Obama, This Machine Stops Pipelines. #NOKXL”

TransCanada is facing a big loss with the rejection of Keystone XL, and they know it. So asking for this “pause” is their last-ditch effort to save the project.

Keystone XL is a major threat to our land, water and climate via any route, and Pres. Obama has all the information he needs to reject the pipeline today.