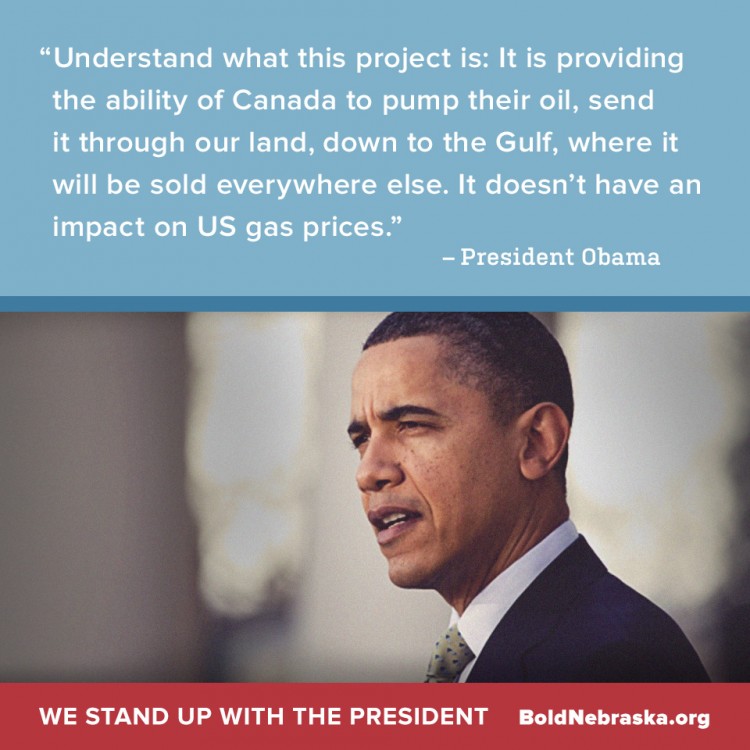 This afternoon, the House of Representatives took their ninth vote to force approval of the Keystone XL tar sands pipeline, in spite of mounting evidence that the controversial project is not in the national interest. As the United States takes steps toward meaningful action on climate, it is clear that Keystone XL would be a step in the wrong direction, threatening the climate as well as our land and water, while bringing no benefits to the American people.

Environmental and landowner groups responded by urging President Obama to stand strong in his commitment to allowing the legally required review process to carry on and not to allow the oil industry’s friends in Congress to force approval of this dangerous project.

“The House of Representatives just voted to take away property rights with their vote for Keystone XL. TransCanada uses eminent domain for private gain while they threaten landowners up and down the route. Farmers and ranchers along with native allies will continue to stand up for land and water and a political vote for Big Oil will not change this basic fact,” said Jane Kleeb of Bold Nebraska.

“This Congress has taken vote after vote to appease corporate polluters by attacking clean air, clean water, and action to tackle the climate crisis. This latest push for the dirty Keystone XL pipeline is no different. The bottom line is the decision whether or not to approve the pipeline rests solely with President Obama, who has repeatedly said he will reject it if it contributes significantly to climate pollution. There is no question that it will, so we remain confident that he will reject this pipeline and these attacks on long-standing executive powers,” said Michael Brune, executive director of the Sierra Club.

“Let’s get one thing straight: this vote is nothing more than an empty act of political theater, because Keystone XL is President Obama’s decision. We’re confident that when everything’s said and done, the President will recognize that a new pipeline spewing emissions and polluting our land is the last thing Americans need — and we’ll keep pushing for rejection. But in the meantime, politicians in Congress should find better things to do than hold more pointless votes that fail to address any of the real issues facing our country,” said May Boeve, Executive Director of 350.org.

“The House-passed bill is wrong for our country. It would short-circuit the deliberative approval process that President Obama has said should run its due course. And it turns Congress into a permitting agency; even worse, one waiving all environmental safeguards and legal challenges from the public. Thus, President Obama has ample reason to veto this measure, saying no to the Keystone XL pipeline—not only for now, but for all time. And today’s vote demonstrated there’s strong support for that veto. That’s because many know the pipeline would be a disaster for our climate and a danger to the land and water that sustains countless Americans,” said Danielle Droitsch, Canada Project Director at the Natural Resources Defense Council.

“It is no surprise that a Congress elected by millions of Koch dollars is once again trying to gift the oil industry this dirty pipeline,” said Luísa Abbott Galvão, Climate & Energy Associate with Friends of the Earth.

“In the wake of an historic agreement to cut carbon pollution, our leaders should be moving forward, not backwards on climate. Keystone may be game over for the climate, but this vote by the House isn’t. The Senate, the President, and local communities this pipeline will harm can still reject this dirty, dangerous project,” said Anna Aurilio of Environment America.

“The current sideshow in Congress does nothing to alter the fundamental facts on Keystone: this decision is the President’s alone to make, and the pipeline miserably fails the climate test. We support the White House’s commitment to reject this politically-motivated stunt, and will continue to call on President Obama to reject the pipeline once and for all,” said Amanda Starbuck, Climate Program Director at Rainforest Action Network.

“South Dakota’s Public Utilities Commission has just started the hearing process at which Dakota Rural Action and our native allies will contest the need for the Keystone XL pipeline, and Nebraska has a lawsuit in their supreme court in which landowners are contesting the proposed KXL route. President Obama has shown his concern for the environment and has stated that he will not approve TransCanada’s permit application if the KXL would significantly add to global warming. There are plenty of studies that will back up the claim that, in fact, building the KXL will exacerbate man made climate change. President Obama has all the facts that he needs to deny TransCanada’s permit application at any time that he chooses to do so,” said Paul Seamans, a Dakota Rural Action member whose land is crossed by the proposed Keystone XL.