Randy became a symbol, a face, someone to represent every farmer, rancher and family that decided to be brave and stand up to a foreign corporation threatening to take their land and risk our water. Americans and Canadians in this new video show you just how brave and strong we are in the face of the tarsands industry and all their Big Oil lobbyists.

After watching the awesome video from our friends at NextGen, we know you are ready stand to with Randy, Jim, Raymond, Adam, Mason (and his pony Thunderpants), Jenni, Eric, Meghan, Doreen and every Caretaker and Warrior fighting this risky tarsands pipeline.

Today, we are asking you to take action and call Senators Franken and Udall. Ask them to continue standing with us.

Senator Franken (D-MN) and Senator Udall (D-CO) are on the Energy Committee and have a vote in front of them that we need them representing our voice, our concern for the land and water and the undeniable issue and impact of carbon pollution from tarsands on climate change. Call, tweet, email and Facebook the Senators thanking them for standing with us and asking they once again stand up to Big Oil.

Why the focus on the Energy Committee?
The Energy and Natural Resources Committee in the US Senate will yet again (probably on Wed.) vote to “approve” Keystone XL. It has the votes to pass the committee, but not the full US Senate. So this is a vote that literally has no impact on the pipeline process.

It’s a shame those Senators who claim to care about state rights and eminent domain that they would deny our state and the federal government to continue the routing process (which is a state rights issue) and determining if the pipeline is in our national interest (a federal issue and process that even Pres. Bush followed).

The vote is coming up for one reason, to give folks who love Big Oil a chance to be on the record for their latest web ad and campaign mailer.

We need Senators standing with us, with ranchers like Randy and with tribal communities at the source and along the proposed route.

We have asked every politician from Pres. Obama, to Gov. Heineman, local officials and the entire Nebraska Legislature to stand with Randy over Big Oil. When you look at the facts, when you see the faces of the Caretakers and Warriors fighting this pipeline it is actually a pretty simple choice.

We chose Randy on day one. We choose Randy five years later.

Full Senate Energy Committee List
While our focus is on thanking Sens. Franken and Udall for standing with us and asking they continue to choose us over risky tarsands, we wanted to make sure you had the full list of Senators serving on the committee. If you have time, calling, tweeting, Facebooking and emailing all of these folks is a very good idea. Big Oil might write many of their checks, but our votes and voices still matter. Hat tip to Committee Maps which makes it super easy to email, call and tweet our elected officials.

Senators Standing with Big Oil:
These Senators have indicated they will vote “yes” on the Keystone XL bill. Tell them you will not give them a pass on this critical vote, accountability matters and so does our property rights, clean water and treaty rights. Click here to get their contact info.

Senators Standing with Randy:
These Senators have either indicated they will vote “no” or they have stood with us in the past. Thank them first and ask them to keep being brave, vote NO on KXL. Click here to get their contact info.

Please continue to stand with us–the farmers, ranchers, moms, tribes–the caretakers and warriors–who know the risks of Keystone XL far outweigh any short lived benefit of cutting thru the Heartland with tarsands.

Here is a video with many of the folks I work with every day fighting this pipeline:https://www.youtube.com/watch?v=7VKJ49sOVXU

We need you. Please vote no on Keystone XL. 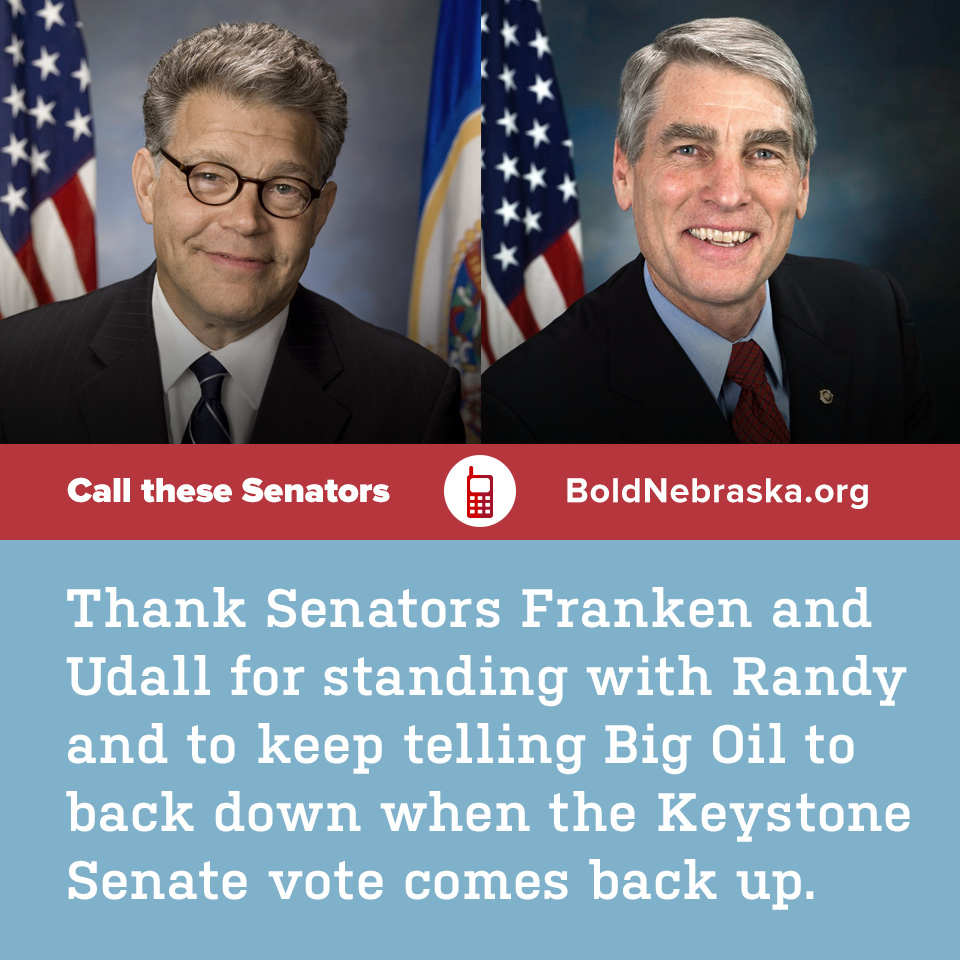