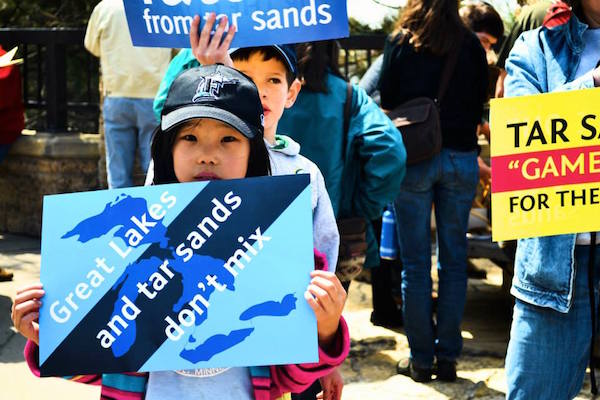 Bold Nebraska is helping to organize and recruit riders for a shared bus to St. Paul to participate in the Tar Sands Resistance March in St. Paul on Saturday, June 6.

>>Tickets are $25 each and may be purchased at this link. **Scholarships also available!!**<<

Join the Facebook event for updates and info on other shared rides.

It’s not just Keystone XL. Big Oil is trying to build and expand an enormous network of tar sands pipelines — some even bigger than Keystone XL — from Canada into the Great Lakes region. These tar sands pipelines, including the Alberta Clipper, along with crude oil trains and tankers, pose a growing risk to the Great Lakes, our rivers, our communities and our climate.

That’s why on June 6, thousands will gather in the Twin Cities for the Tar Sands Resistance March — the largest anti-tar sands event ever in the region. We are coming together to send a clear message: keep toxic tar sands out of America’s Heartland, fight for clean water, clean energy, and a safe climate!