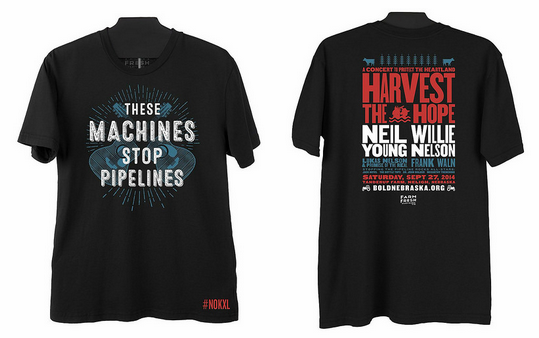 Lincoln, Nebraska — Original artwork for the official t-shirt that will be sold at the “Harvest the Hope” benefit concert featuring Willie Nelson and Neil Young on Sept. 27 was released today.

The USA-made, 100% organic cotton t-shirts are being delivered from Farm Fresh Clothing Co., a company committed to sourcing organic cotton.

One of the reasons Bold chose to use organic t-shirts was Neil Young’s call to action around organic cotton.

“Take a personal vow, as I have, to make a difference in any way you can. Thank you to the Cowboy and Indian Alliance for taking this step to protect the environment.” –Neil Young

Created by local artist Justin Kemerling, the front of the t-shirt features two guitars with the words “These machines stop pipelines,” a nod to the critical importance of using music and culture to fight the risky Keystone XL pipeline.

The reverse side of the shirt features the concert billing and Kemerling’s artwork, including the Cowboy and Indian Alliance icon, which will also be featured on the official “Harvest the Hope” concert poster.

”Farm Fresh knows first-hand the importance of using organic cotton in our shirts. Family farmers who utilize organic practices are rock stars in our eyes and we are proud to partner with Harvest the Hope concert to protect the Heartland and honor Neil Young’s commitment to the earth.” –Matt Morgan, CEO, Farm Fresh Clothing

More on Harvest the Hope Concert to Protect the Heartland:
Proceeds from the “Harvest the Hope” concert will go to Bold Nebraska, the Indigenous Environmental Network and the Cowboy & Indian Alliance, to fund the ongoing fight against the Keystone XL pipeline, as well as a number of small, community-based clean energy projects on farms and tribal lands. The daytime, outdoor concert will take place in a field on a farm owned by the Tanderup family, who are part of a strong collective of Nebraska landowners refusing to sell their land to TransCanada for the Keystone XL (KXL) pipeline.