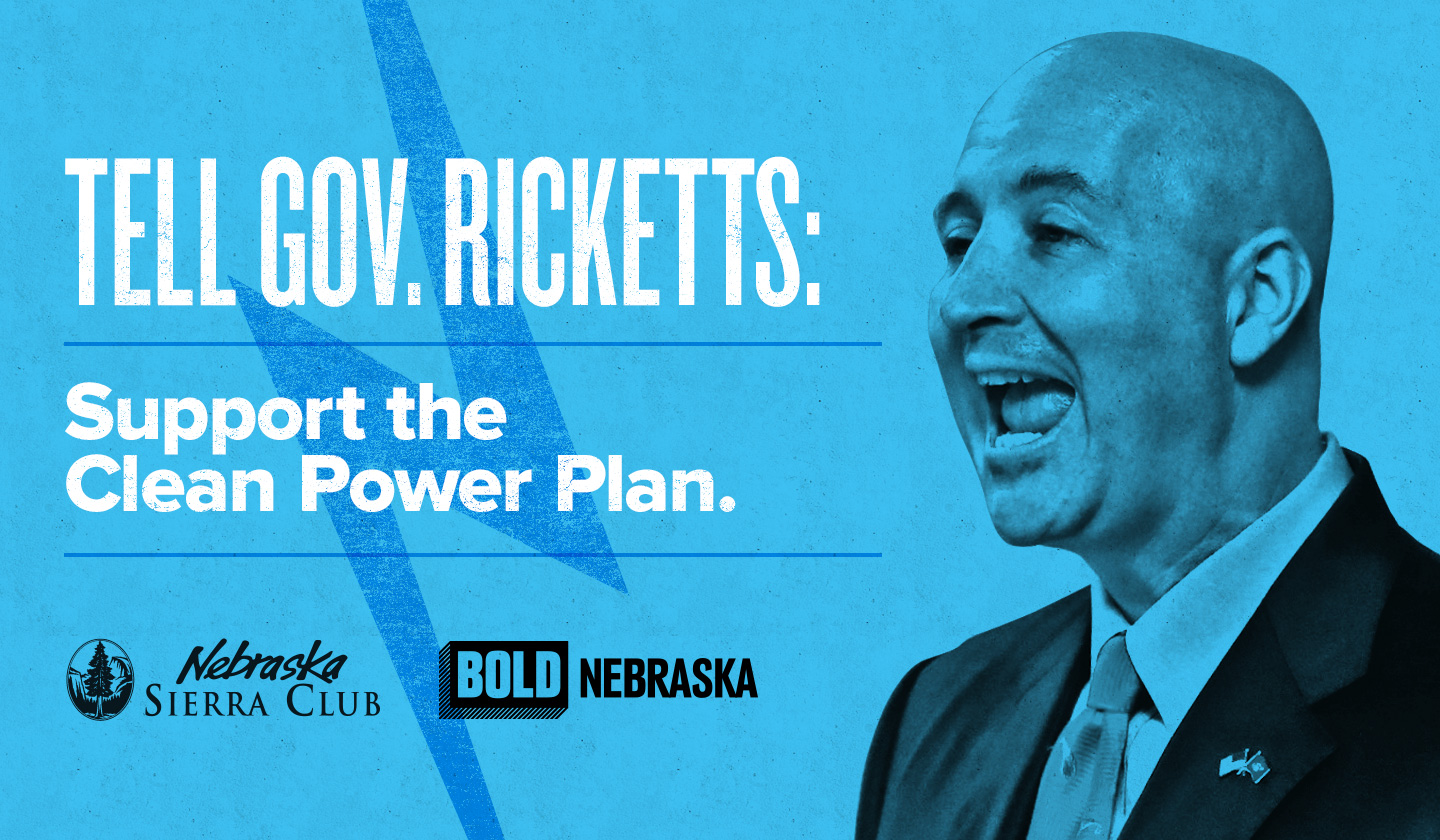 All while still having all the power we need to grow Nebraska’s economy and maintain public power’s competitive edge.

Nebraska is Trying to Kill the Clean Power Plan

But Nebraska’s elected officials are actively trying to kill or weaken the Clean Power Plan.

Gov. Pete Ricketts and Attorney General Doug Peterson have announced that Nebraska will join a multi-state lawsuit that aims to kill the Clean Power Plan, with Peterson arguing the Plan will “drive up electrical costs” and Ricketts calling it “yet another example of how the EPA continues to overstep the authority given to them by Congress.”(1)

Nebraska has also participated in *three* other attempts to kill the Clean Power Plan — including a lawsuit filed by former Gov. Heineman and Attorney General Jon Bruning that was thrown out by a federal judge in October 2014 (2); another filed by a group of 12 states that are either large producers or consumers of coal*(3); and a lawsuit filed by Murray Energy, the largest independently-owned coal company in the country, whose owner Roger Murray has said publicly he believes the EPA has been lying about the existence of global warming, and that the earth is actually getting colder.(4)

(*In Nebraska, we still generate over 70% of our electricity from burning coal that is imported on rail cars from Wyoming and other states.)

As soon as the EPA’s final Clean Power Plan rule is officially published — expected sometime in August — Nebraska plans to join other states in filing a lawsuit aimed at killing the Clean Power Plan.

On top of the lawsuits Nebraska has joined to kill the Clean Power Plan, Big Oil and corporate interest groups like ALEC are working to kill or weaken our state’s energy plan — arguing it will be “too expensive” an effort to clean up their pollution and take action to combat the reality of climate change, resulting in “significantly higher electricity rates that Nebraskans can’t afford.”(5)

But the EPA estimates the Clean Power Plan will result in 3,500 fewer deaths annually with the decline in heart attacks and lung disease when soot and smog are reduced; and projects up to $7 for every American in health benefits, for every $1 spent complying with the plan.(6)

Studies conducted by the EPA and corroborated by the Union of Concerned Scientists, Analysis Group and Synapse Energy Economics found that the Clean Power Plan will actually result in *lower* electricity costs for ratepayers, over the long term.(7)

If Nebraska Fails to Develop a Plan, the Feds Will Do It for Us

Nebraska’s Department of Environmental Quality (DEQ) and State Energy Office have been tasked with creating our state’s energy plan. These agencies have informed us that they are currently meeting with utility companies in the state to begin formulating our state plan, and then plan to hold a number of public hearings later on in the process. We do not know the timeframe, but will inform the public as soon as we have more information.

If Gov. Ricketts orders the DEQ to ignore EPA’s directive that each state develop its own energy plan, it would trigger the federal government stepping in to develop a plan for us that ensures Nebraska complies with the national rules.

We need the DEQ to develop a robust plan that benefits Nebraska, with ample opportunities for public input.

In spite of any future efforts by Gov. Ricketts and Atty General Peterson to torpedo the Clean Power Plan, a growing number of Nebraska’s utilities and municipalities have already launched plans to reduce carbon emissions and transition away from coal to cleaner energy because it just makes sense — both from an economic and an environmental perspective. Farmers, ranchers, homeowners and small businesses are also switching to clean energy because they know it’s better for their health and bottom line.

Nebraska’s two largest cities — Omaha and Lincoln — have recently committed to invest 33% and 48%, of their retail energy sales in renewable energy by 2018, respectively, and will do so while projecting a savings for their energy customers.(8)

Meanwhile, in smaller towns like Central City and Petersburg, investors are finding it promising to build their own community solar and wind projects to bring distributed energy to the local community — saving small towns money while creating a long-lasting source of clean energy that’s good for our air and our health.

Nebraska has amazing untapped potential to further transition away from dirty fossil fuels and invest in more clean, locally-produced renewable energy, as our state ranks 3rd in wind-generating potential, but just 18th in production. Nebraska also receives as much sunlight as Texas and southern California, but ranks a dismal 44th place among the states in solar energy production.(9)

Statewide and local organizations and groups that support the Clean Power Plan include:

We call on Gov. Ricketts and Attorney General Peterson to stop Nebraska’s fight against the Clean Power Plan. Nebraskans will benefit from the cleaner air and lower electricity rates resulting from reducing pollution from dirty coal-fired power plants, increasing energy efficiency, and transitioning to cleaner forms of energy.