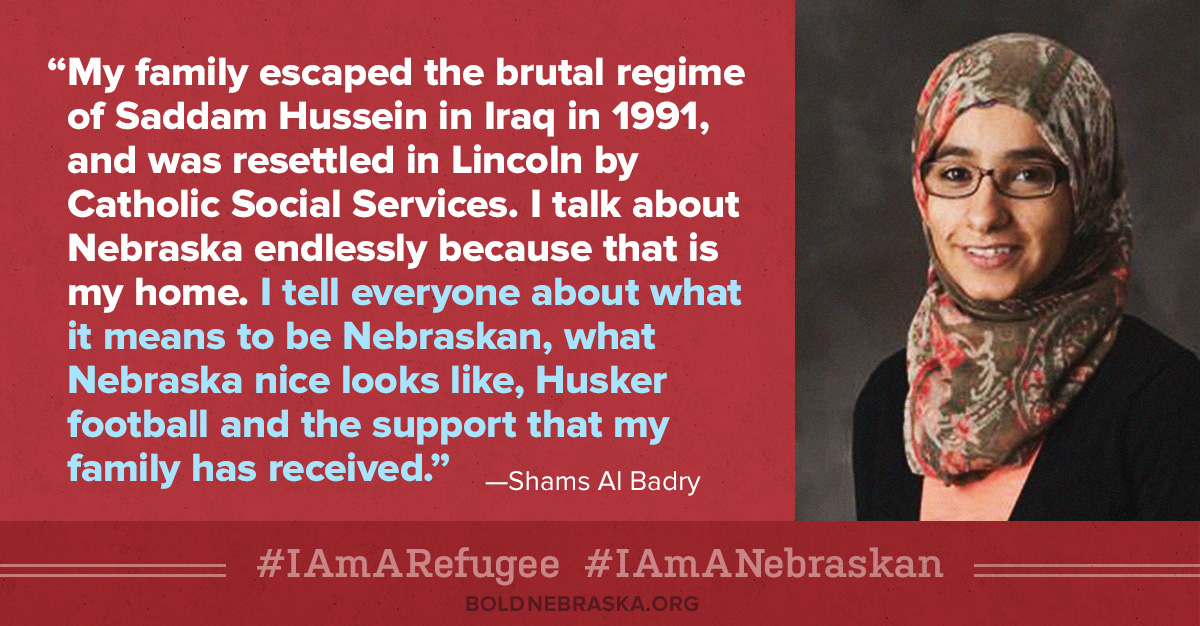 (*Note from Bold Nebraska: When we saw a Facebook post from Nebraskan Shams Al Badry, we reached out to her and asked if we could share her story and anger about what Nebraska politicians are saying about refugees.)

A response to Gov. Ricketts letter

I have tried to stay away from social media because of the lack of humanity and the disrespect that I have seen for these past couple weeks.

As many of you know, I am not the best at storytelling but something that I feel like I need to share with you all tonight has left me speechless and shaken to my core.

In 1991, my mom, four older brothers and myself escaped Iraq because of the brutal regime of Saddam Hussein and the Gulf War. My dad had already fled the country to Saudi Arabia, we were reunited with him at the refugee camp in Rafha.

My parents did not leave Iraq because they wanted to, they left because they were FORCED to leave their home. They wanted to provide their kids the freedoms that they had experienced prior to the unrest in the Middle East, safety and education.

My family was resettled in Nebraska by Catholic Social Services in 1993.

Lincoln quickly became home, we had built a community and a home base. We were safe, we had the opportunity to attain a quality education.

I had the privilege of receiving a full ride scholarship to the only university I had dreamed of attending based on financial need through the Buffet Foundation. I joined many different organizations on campus, I met people from all over the world, I studied abroad, I graduated.

I made it into Teach for America and committed two years of service with Americorps. I am currently working in Kansas City with the most amazing students ever.

I talk about Nebraska endlessly because that is my home. I tell everyone about what it means to be Nebraskan, what Nebraska nice looks like, Husker football and the support that my family has received.

Governor Ricketts, I am ashamed of you and your knee-jerk reaction.

I hope you read more into what qualifies a refugee to seek refugee status in the United States.

You may be a disappointment, but I know for a fact that my home state of Nebraska does not carry the hate that you do.

Nebraskans are genuinely welcoming people, and we have the means — not to mention a moral obligation — to open our door to families like Shams’, who are facing devastation in the Middle East and a stark choice to flee or else die amid the chaos.

But Governor Pete Ricketts has ordered Nebraska to turn away these families who are fleeing for their lives from Syria right now.(1)

Ricketts ordered our state’s three existing refugee resettlement agencies not to accept Syrian refugees — but two have already said they will not comply, including Catholic Social Services.(2)

Stand with us to demand that Gov. Ricketts and Nebraska’s representatives in Congress support the admittance of refugees from Syria to Nebraska, so that our great state can continue its tradition of welcoming all to share in “The Good Life,” like Shams did.