Bold Nebraska supports marriage equality and the efforts of local groups including the ACLU of Nebraska, HRC Nebraska, and state senators working to put in place protections for the LGBT community in the workplace, housing, and elsewhere inequalities still exist.

EQUALITY AGENDA IN THE UNICAM:

UPDATE: The Equality Agenda bills will have their first hearing before the Judiciary Committee on Wednesday, Feb. 4 at 1:30 p.m. in Room 1113 of the State Capitol.

Thanks to Nebraska State Senators Adam Morfeld, Sara Howard and Jeremy Nordquist for introducing bills aimed at extending workplace protections to the LGBT community, remove discriminatory limitations on the rights of same-sex couples and other unmarried pairs to adopt children or become foster parents, and eliminate discrimination towards gay and lesbian foster parents regardless of relationship status. Read the Lincoln Journal Star’s report on the Equality Agenda.

Federal judge Joseph Battalion on Tuesday denied the state of Nebraska’s motion to stay a lawsuit seeking to overturn Nebraska’s discriminatory law banning marriage for same-sex couples, and set a hearing date of Feb. 19 to discuss a motion for preliminary injunction where attorneys will argue whether same-sex marriages should go forward immediately while the case moves through the federal court.

“Whatever public interest the state has is insufficient in light of the plaintiffs’ showing of serious, irreparable and immediate harm,” Bataillon wrote.

Attorneys for the couples with the ACLU of Nebraska and local firm Koenig Dunne argued that they urgently need the protections of marriage and “would suffer serious and irreparable harms should the court stay the proceedings until the Supreme Court issues its opinion.”

“We look forward to our day in court so that we can continue fighting for our clients and the thousands of gay and lesbian Nebraskans that should have the freedom to marry and their relationships recognized. It is time to end the discrimination that is enshrined in our Constitution.”

OMAHA, Neb. – The American Civil Liberties Union, the ACLU of Nebraska and the law firm of Koenig | Dunne filed a lawsuit in federal court today on behalf of seven couples who seek state recognition of their marriages or who seek the freedom to marry in Nebraska.

“Today is an exciting day for all Nebraskans because freedom means freedom for everyone. The couples we represent in this historic case are all tax paying citizens who are active in their communities and who are contributing positively to our economy. These families have served our country, are successful in their professions, and are parents raising children. The couples we represent seek nothing more and nothing less than the freedom to marry who they love. Nebraska has waited long enough it is time for the Cornhusker state to extend the freedom to marry to all its citizens,” said ACLU of Nebraska Executive Director Danielle Conrad.

The plaintiffs include Susan and Sally Waters of Omaha who have been together for seventeen years. In January 2013, Sally was diagnosed with breast cancer which has progressed to stage four and is considered terminal.

“We have said publicly before God, our family and our friends that we love each other and are committed to one another and our children,” said Sally Waters, “At this moment, I want to spend time loving my children and my wife while knowing that should I die, they will be cared for. By not recognizing my family, Nebraska is making a difficult situation much more difficult emotionally and financially.”

“These families simply want the security and recognition that only marriage provides,” said Amy Miller, legal director of the ACLU of Nebraska. “It is wrong for the state to treat these loving and committed couples as second-class citizens. When a family has roots in Nebraska or wants to call Nebraska home, they should be able to do so without being treated as legal strangers.”

The lawsuit will be filed in the U.S. District Court. The plaintiffs allege that the state’s constitutional marriage ban unlawfully discriminates against lesbians, gay men, and their children. Due to Sally Waters’ medical condition, the attorneys will be filing a separate motion for emergency relief. 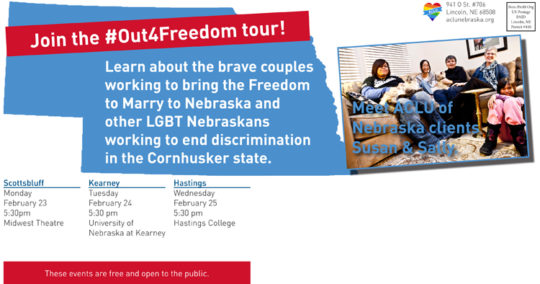 News February 17, 2015
Tagged ACLU, Marriage Equality
The ACLU of Nebraska has organized a 2015 Greater Nebraska Freedom Tour, where Nebraskans can meet Susan and Sally Waters, two of the plaintiffs suing the state to give all the freedom to marry. The events will take place Feb. 23-25 at 5:30 p.m. in Scottsbluff (23rd), Kearney (24th) and Hastings (25th). In addition, the […]
Read Post
All News