OMAHA – Over 40 citizens and representatives from community groups from across Omaha rallied today prior to a meeting of the Omaha Public Power District (OPPD) Board of Directors,  demanding a new plan from OPPD in lieu of the utility’s recent fixed monthly fee increase proposal.

After the rally, citizens entered the OPPD board meeting to deliver a petition started by Bold Nebraska signed by over 2,500 customers opposed to OPPD’s fixed rate hike proposal, and a letter of opposition to the rate hike signed by over thirty organizations and businesses.

OPPD Board Chair Anne McGuire at first recognized the citizens who entered the meeting to deliver the petition, and then went on to read a prepared statement for several minutes, addressing the petition and OPPD’s reaction.

But when representative and OPPD ratepayer Liz Veazey began to speak in response to Anne’s remarks, she was shamefully shouted down by Anne and several other OPPD board members, in a show of disrespect for all those who came to make their concerns heard to the OPPD board in person.

“OPPD has pretended to listen for too long and today we saw that. After reading a prepared statement with OPPD’s talking points on the fixed fee increase, instead of giving citizens the chance to respond, Board members stuck to their inexplicable policy to not allow the public to be heard despite the large crowd present.” said David Corbin with the Nebraska Sierra Club. “It’s time for OPPD’s Board to listen to its customer-owners, and demand a new plan that is fair to the most vulnerable in our communities, and moves us toward a clean energy future.”

“Citizens are yet again putting the public back in public power. If “OPPD Cares,” they will take this proposal to hike fixed fees off the table,” said Bold Nebraska director Jane Kleeb. “Rather than increasing fixed fees to increase revenue, OPPD should be looking to increase services the public wants, like rooftop solar. For too long, our public power utilities have relied on an outdated business model. It’s time to disrupt the system with proven and structural change.

OPPD’s Board of Directors is considering a rate restructuring plan proposed by the utility that will raise the fixed fee that every customer must pay each month from the current rate of $10.25 to as high as $30 per month by 2019.

Residents have turned out in force to oppose OPPD’s proposed plan, which disproportionately penalizes customers who use less energy, many of whom are low income families and fixed income senior citizens.

“Oppd is shifting the distribution costs of the energy grid  from high use customers to low use customers. Over 52,000 low use households will pay over $100 more each year for the same amount of electricity while 40,000 high use households will pay $150 per year less for the same amount of electricity.  This is an attack on the poor and people who try to help them.” said Joe Higgs of Omaha Together One Community (OTOC).

OPPD’s new rate restructuring plan also discourages homeowners and businesses who use less energy due to energy efficiency upgrades, which will lead to further dependence on polluting fossil fuels at a time when OPPD is aiming to modernize the way it gets its energy. 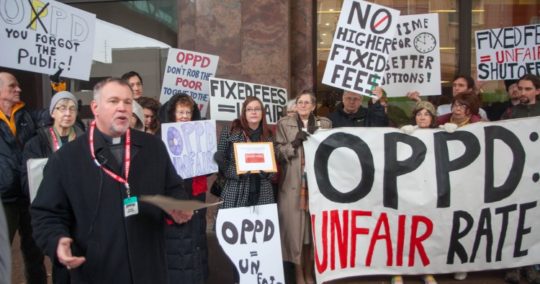 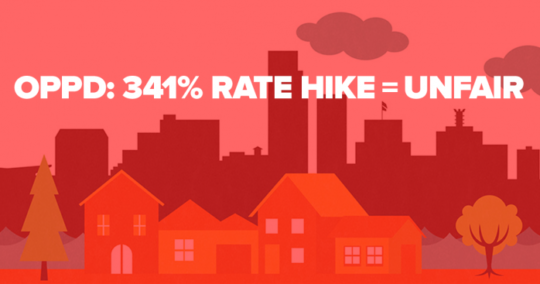