Check out the latest editorial cartoon from Neal Obermayer below.

EDITOR’S NOTE: Nebraska State Sen. Mark Christensen (R-Imperial) wants to arm teachers with guns after a few hours of training. His new bill mirrors language that the NRA has been pushing around the country. Christensen says this will help rural schools. There is no evidence arming teachers helps decrease gun violence, and not a single documented case where an armed teacher was able to stop a criminal from harming our kids. Police and firefighters are trained for years to handle crisis moments, making sure they have resources to their job. Funding for mental health is the answer, not arming our teachers. —Jane Kleeb 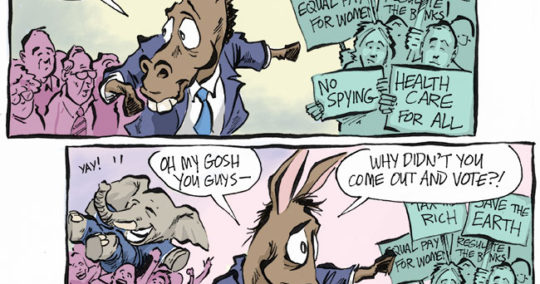 News November 11, 2014
Tagged Cartoon, Elections, Neal Obermeyer
Editor’s Note: This political cartoon was created by Neal Obermeyer, who can be followed at nealo.com and on Twitter @nealobermeyer.
Read Post
All News