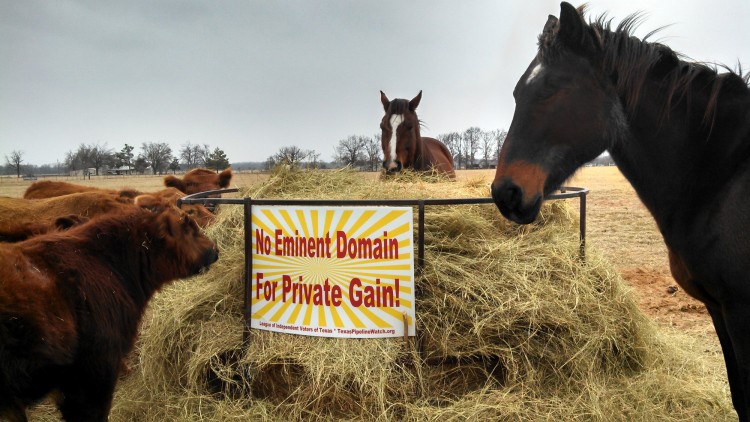 Donald Trump stood on the debate stage, with all his famous gusto, and proclaimed he loves eminent domain.

Trump continued to say, “Keystone XL could not be built without it.” Well Mr. Trump, that is the point—our founding fathers never intended private corporations to use eminent domain for their private gain.

While hugging eminent domain might work in the corporate world, for real-world voters it’s an issue that bridges conservatives, progressives and everyone in between to stand together to protect our property rights.

New Hampshire landowners are currently fighting eminent domain abuse from Kinder Morgan, a corporation run by a former Enron executive. Kinder Morgan joins Enbridge and TransCanada in their desire to build a spider web of pipelines across our country to access the international export market. Kinder Morgan’s New Hampshire pipeline, just like Keystone XL, is not being built for “public purpose” instead it is for private gain putting land and water at-risk along the way.

American landowners face serious risks with eminent domain for private gain, beyond the obvious loss of property rights. If a permitting agency like FERC or the State Department rejects a pipeline, exactly like what happened with Keystone XL, the pipeline company still owns the land they took through eminent domain. Pipeline companies with a rejected permit can turn around and sell the easement to any company they want and the landowner has no say in the land sale process. How’s that for making America great again?

States are beginning to stand up on eminent domain abuse and see the fundamental difference between public good and private gain. Kentucky stood with landowners and told the Bluegrass pipeline they cannot use eminent domain because their project was for private gain. South Carolina has a bill, spurred by an export pipeline Kinder Morgan wants to build, that forbids private, for-profit pipeline companies from using eminent domain. Georgia recently told Kinder Morgan they could not use eminent domain because their pipeline has no public use. These are hardly “blue” states. These are states with strong leaders standing up for property rights with actions, not words.

A federal and state-based solution is needed that protects all Americans’ property rights beyond fancy talking points from politicians on the campaign trail. A clear process must be laid out for pipelines since right now each state does it differently thereby adding confusion to a process already rigged for Big Oil.

We know where Trump stands—he loves eminent domain even for private gain. The real question is where do all the other candidates stand on the critical issue of property rights? You cannot say you are against eminent domain abuse and then turn around and say you support the Keystone XL pipeline. Because like Trump said, “you cannot build Keystone XL without it.”

Voters are tired of Big Oil’s land grab and want a President who will end once and for all eminent domain for private gain. Eminent domain might be a sleeper issue right now, but Presidential campaigns should be aware of the giant that has been shook at the local level and the network of pipeline fighters is strong and growing every day.