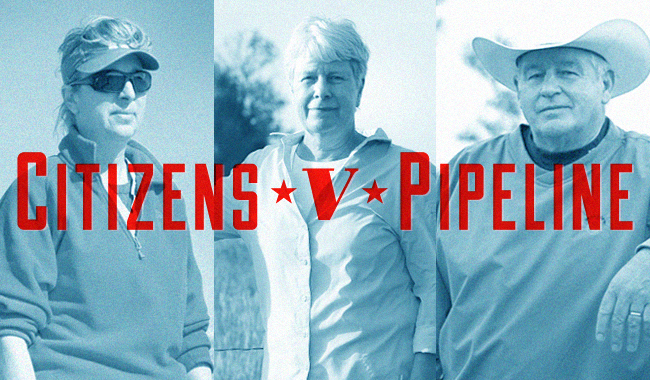 In their brief, the landowners argue that LB 1161 is unconstitutional because it improperly moved the authority to grant “eminent domain” power from the Public Service Commission to the Governor, and on several other grounds outlined in the brief below.

We still do not have a date for oral arguments before the Nebraska Supreme Court, but attorney Dave Domina expects it to be scheduled for September or October.

Should the Nebraska Supreme Court side with landowners and a lower court and find LB 1161 to be unconstitutional, TransCanada would have to reapply for a route for Keystone XL with the Nebraska Public Service Commission, a process that could take up to 7 months.

Omaha, NE – Landowners filed their written arguments (available here) with the Nebraska Supreme Court late Friday, June 20. Randy Thompson, Suz Straka and Susan Dunavan filed the case in May 2012 to challenge the validity of LB 1161. The law was passed by the Unicameral during the 2012 Presidential election when the TransCanada Keystone XL pipeline was gaining early notice as a political issue. The landowners claim the law was passed as a partisan act and special favor to the foreign pipeline company to allow it to condemn land and take it from private owners.

The Landowners’ Brief argues that LB 1161 violates the Nebraska Constitution because the law; a) improperly lets the Governor approve a route for the pipeline when this duty is conferred strictly on the Public Service Commission;  b) improperly allows the Governor to confer the power of eminent domain on a private company; c) requires the State to pledge its credit and money to finance a route investigation for a private party; and d) denies citizens proper legal procedures because LB 1161 contains no legal standard for decisions and no provision for judicial review.

In February, the District Court in Lincoln ruled for the landowners and declared LB 1161 invalid.  Gov. Heineman and the Attorney General appealed.  Summarizing the appeal, and responsive arguments, the Landowners’ argue:

Heineman’s argument for reversal and for a decision upholding LB 1161 as a lawful delegation of authority to the Governor turns on what is a “common carrier”.  He contends  LB 1161 does not regulate common carriers. [He is wrong.]  LB 1161 contains telltale admissions that it does apply to common carriers. First, in §1 (E3, p3) it refers to “transporting or conveying” products “through or across” Nebraska.Second, §1 confers the power to extend eminent domain authority to approved pipeline carriers though this term does not appear until later. Third, the term used in LB 1161 is “Commission”  [and this means  the PSC.]  Fourth, [LB 1161] uses the term “pipeline carrier”. Fifth, the power of eminent domain is only exercisable when a taking is for a “public purpose”. Unless TransCanada is a common carrier that carries goods for others, it is just a private company doing nothing for the public, and there is no public purpose.

“Our clients defense of the Constitution continues. Protecting individual liberties and property rights while guarding against expedient political shortcuts for big oil favors continues to be the focus of this case. The Attorney General’s office has the opportunity to file a final reply brief and to answer our cross appeal raising more issues about this law. We will then get the final word. I suspect the case will be heard by the Supreme Court in September or perhaps October.”

On April 18, 2014, the U.S. Department of State extended the timetable for its decision on the proposed KXL pipeline project citing the Nebraska constitutional challenge lawsuit correctly noting the outcome of the case will affect the Nebraska route. After this announcement Domina stated “I am not surprised. The President has insisted that he have all the facts about the pipeline and the route before making his Executive Decision.  Nebraska’s Supreme Court must decide a state law question. The decision bears directly on where, when, and if the pipeline company will be permitted to operate across Nebraska. The President knows the current route may change. And it should… it still crosses the Ogallala aquifer.”

“My landowner clients are standing up for the Nebraska Constitution in the face of an attempt by big oil and politicians to run over it,” added Domina.

If the district court’s decision in favor of the landowners is upheld by the Nebraska Supreme Court, any pipeline route review would go to the Nebraska Public Service Commission (PSC). The PSC review process could take approximately 7 months.