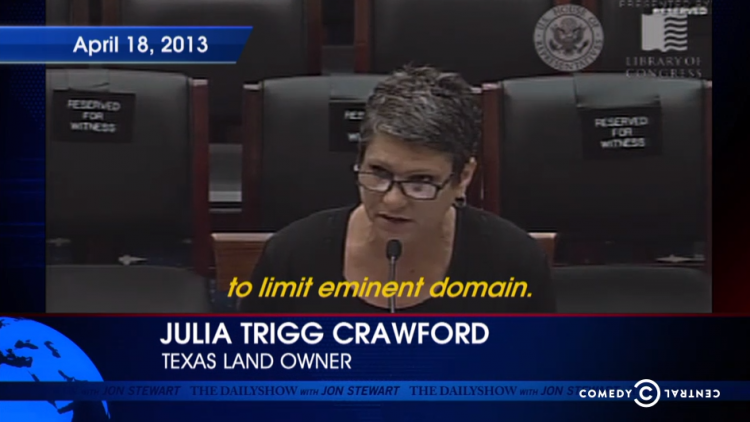 You know you hit the big time when John Stewart covers the issue you are working on during the Daily Show. Keystone XL is a risky tarsands pipeline that cuts through the Heartland so Canada can get their carbon-intensive oil on the export market. They also use eminent domain to take farmers and ranchers land for Big Oil’s private gain.

TransCanada bullied landowners from day one, telling them, “If you do not take this offer, we will take you to court, and you will get nothing.”

Yes, that is how TransCanada, the owner of Keystone, treats landowners.

One of TransCanada’s land agents even misled farmers saying he was a preacher and asked them to pray with him before he would show them the offer for their land.

We were in the Senate Gallery when the Keystone XL “hail Mary” bill was defeated this past week. We will be there again if the GOP-led Congress decides to try and go around the US Constitution by approving the risky pipeline. We had to endure oil-soaked Senators lying about the route, lying about the number of jobs and avoiding how awful TransCanada has treated landowners in the Heartland.

President Obama can tell the Republicans and Big Oil to take this pipeline and shove it by rejecting Keystone XL now. He has all the facts and science to back up a rejection — since the decision is in the hands of the President, not Congress.

President Obama also has the hearts and minds of folks in the Heartland that have been fighting for over five years to protect the water and land that has been in their families hands for over 100 years.

You can help by sending the President a pen that has a simple message: “This machine stops pipelines.” Pres. Obama can use the pen to either veto any GOP Keystone bill, or to reject the pipeline before the GOP-Congress is sworn in so our families can continue to grow food without the risk of a tarsands spill polluting our land and water.